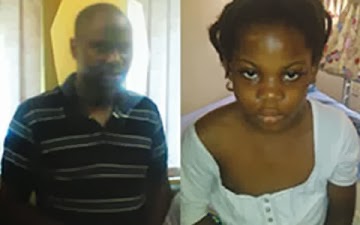 It took a while to rouse eight-year-old Sophia Shaidu, as she lay on her stomach on a bed in the children’s ward of the Aniyun Hospital, Gbagada, Lagos.

The nurse who had taken our correspondent in to see her was happy that the girl could at least fall asleep after days of excruciating pains that kept her awake.

“Some people are here to talk to you,” she was told.

Sophia spoke only Ebira language. She does not understand English; not even pidgin English because her guardian did not enrol her in school after she was brought to Lagos to work as a housemaid about three years ago.

So, our correspondent was only able to speak to her through an interpreter.

One thing was immediately clear when Sophia finally sat up with a considerable pain: dark marks dotted her body from her neck to her ankle.

She hung her left arm awkwardly, which made her flinch at the nurse’s touch.

“We are planning to do an X-ray on the arm. It’s likely she has a fracture there,” the nurse said.

“The marks on my body are from beatings,” the girl later explained.

Sophia said that after one of such beatings, she had not been able to use her left arm, which was now swollen, hard and discoloured at the elbow area.

The girl pointed accusing fingers at her guardian, Bashir Shuaibu, who is from Kogi State.

But what brought Sophia to the hospital was more dire and life-threatening than just the marks on her body and the fractured arm.

The little girl has a gash that is about six inches in diametre on her buttocks. It was created by sore, said to have developed after several beatings by Shuaibu.

She told our correspondent that her parents asked her to live with him to make a living.

She said, “We are not related. My parents asked me to live with him in Lagos so that I could work and make money to take care of myself.

“He beat me almost every day and I don’t usually know what I did wrong. Anytime he beat me, I would scream and ask him what I did wrong, but he would not say anything. He would just continue to beat me.

“He usually beat me in the buttocks. I got a wound after a beating and I could not sit. He beat me on the same spot every day. He used wire and spatula (what Yoruba call orogun).”

Shuaibu is married and has a young child. Our correspondent asked if his wife ever joined in the beating as well but the girl explained that the wife usually told him to stop when the beating became too much.

“The last time he beat me (last week Friday), madam complained again and said it was his beating that made my buttocks have sore. She then said they had to take me to the hospital.”

When our correspondent visited the hospital in company with the Director of the Esther Child Rights Foundation, Mrs. Esther Ogwu, who is handling the case, the girl’s buttocks had been wrapped in a heavy dressing.

But a doctor who treated the girl was so alarmed by what he saw that he took many photographs before he dressed the wound.

“She still has a long way to go. Because of the extent of the injury, it cannot heal on its own. She has to undergo skin grafting. That cannot even be done at the moment, she has to remain in observation for a while,” the doctor said.

The flesh on Sophia’s buttocks when she was brought to the hospital was oozing pus and had to be scraped off, leaving a large gash.

The picture of the naked wound was so horrific that Saturday PUNCH could not publish it.

When our correspondent asked Sophia if she ever thought about running away because of the physical abuse, she said she thought about it but she didn’t know where to run to.

“I like my mother but I don’t want to go back to our village. My mother told me when I was leaving home to remain in Lagos and work,” the girl said.

She said her mother did not know what she was passing through because she had never spoken with her since she was brought to Shuaibu’s house to work three years ago.

She does not know her mother’s phone number.

The girl said the man had told her parents that she would be enrolled in school, but that never happened.

Shuaibu who was arrested and detained at the office of the Lagos State Taskforce has been released on bail. The hospital said he had not been forthcoming with the fund for the treatment of the girl.

Shuaibu, who claimed he still intended to put the girl in school, said he only spanked her when she acted stubbornly, lied and defecated in the house.

“Her parents are my relations. She is lazy and does no work. I did not know she had injury on her buttocks because she was hiding it. It was when we noticed it that we brought her to the hospital. I really regret that something like this happened to her,” he said.

Ogwu said cases of extreme physical abuse on housemaids were becoming common in the country because perpetrators were not being jailed for such crimes.

She said, “When we were contacted by nurses at the hospital and we visited the girl, what I saw was something I almost could not handle emotionally. I cried because I simply could not understand that a human being would do that to a child.

“Is it that people do not know that physical abuse or any kind of abuse of a child is a serious crime? Or is it that people believe they can bribe the police and get away with this kind of crime when they are arrested? It is just very sad.

“That child cannot be normal again because the money required for her treatment cannot be paid by the man who committed the crime. The only choice we have left is to see if the state government can wade into the matter and get her treated in a government-owned hospital.”

She said the parents of the girl should be prosecuted along with the man who perpetrated the abuse.

Our correspondent contacted the Chairman, Lagos State Task Force, Supol Bayo Suleiman, to find out what arrangement had been made to hold Shuaibu accountable for what he did.

Suleiman said he was released on bail with sureties and had been directed to report to the task force office daily.

“You know when a girl defecates on the bed everyday and one has tried to correct her with no change, he may have to punish her to ensure she changes. But it is unfortunate it led to this kind of thing in this case.”

When told that the man’s ‘correction’ showed numerous marks of spanking all over the body of the girl, Suleiman said “Truly, spanking a child should have limits. But in this case, it’s just unfortunate that it led to such injury.”

He explained that his office was still handling the issue to ensure that proper care was given to the girl.

The Child Rights Act 2003, Section 14 states that “Every child has a right to parental care and protection. No child shall be separated from his parents against the wish of the child except for the purpose of his education and welfare.”

Section 11 of the law also criminalises various forms of abuse of a child, one of which is the extreme physical abuse that Sophia has suffered.