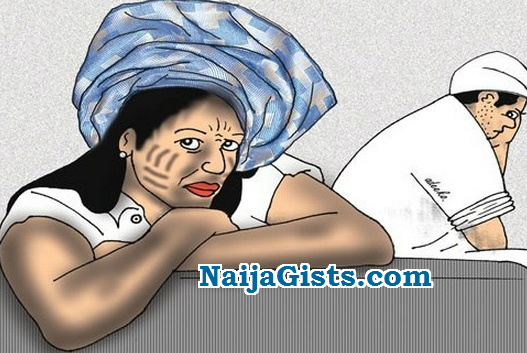 Mr Henric Agbaje, the President of a Mapo Customary Court in Ibadan, on Monday dissolved a 13-year-old marriage between Ganiu Aremu and his wife; Omolola for sexually starving her husband.

In his judgment, Agbaje said that he was convinced from what he saw of the couple that the bound of love between them had ceased to be.

He ordered that Omolola should take custody of the 10-year-old child between the couple.
“In addition, Aremu shall pay a monthly feeding allowance of N10, 000 for the welfare of the son and shall not falter in his responsibility for his school fees.

“In the interest of peaceful coexistence, Omolola shall produce the child in the court anytime Aremu wants to see him,” the arbitrator stated.

Narrating his ordeal, Aremu told the court that his wife had for over a year sexually starved him in addition to her extreme cruelty to him.

“My wife is unrepentantly cruel; inflicting physical and emotional harm to me and my relatives who have the misfortune of living with me.

“Aside from that, she is extremely hostile to me and other members of my extended family.
“For instance, she does not want to see my mother in anyway, calling her a witch.
“If any of my friends from either far or near come visiting without her approval, Omolola will turn them away or fight them.

“Sometimes, she locked up some of my people in the house, thus, preventing them from going on their legitimate businesses.
“As if those are not enough, Omolola fragrantly disobey my simple rules and instructions that will enable harmonious living at home.

“Worst still, Omolola has ensured complete emotional detachment from me as her husband including denial of conjugal rite,” Aremu explained.

The plaintiff, who is a trained Medical Doctor is a staff of the Federal Staff Hospital in Abuja and has his Ibadan address as Plot 4, Olusola-Ajadi Layout, Ehin Grammar Ibadan.

In her argument, Omolola, however, debunked the claims made by Aremu, describing them as lies.
She vowed never to collect anything from him for the upkeep of the child.

“Since Aremu has chosen to abandon the child and I, we don’t need anything from him, my God is able to cater for us,” Omolola stated.

Omolola lives in Lagos and works as a teacher.