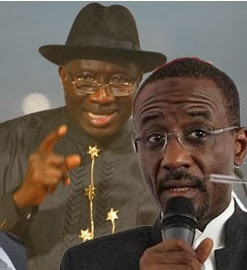 Before attempting to digest what $20 billion is, it is important to mention what the $20 billion missing is not. $20 billion Nigeria’s income missing/looted is not all that was looted in just 19 months from the nation’s coffers. This sum is at best half the actual total figure that is looted from oil revenue and internal projects and bogus contracts. It is ‘crazy’ to realize that more than half the nation’s income is stolen by those in power and their handful of world acclaimed billionaire cabal co-conspirators.

$20 billion represents one eighth of Nigeria’s total oil derived income. That is one quarter of our yearly earnings.

With $20 billion, every Nigerian individual, including the poorest in Bama and Baga and the old and dying in all villages, will get N10,000.

With $20 billion, every single Nigerian can get 5 new pairs of shoes.

With $20 billion looted, every household in Nigeria, including every mud family home in every single village could get either a $1000 generator borehole or an inverter-solar panel system!

With $20 billion stolen, every home in every village and town could have a $500 laptop computer.

With $20 billion dollars stolen in 19 months, 2 children in every family could be sponsored throughout their education right up to university.

With $20 billion looted, one child of every family of 5 can be sponsored to a good college even in America.

With $20 billion stolen, Nigeria could have purchased 40,000 Armored Personnel Carriers, APC’s to successfully finally decimate Boko Haram and be prepared for any future battles within and outside our borders.

With $20 billion stolen, Nigeria could have bought a million drones, for tracking every single robbery and moving terrorist.

With $20 billion, we could have purchased 150,000 helicopters for all our police, hospital and other emergency departments across the nation.

Brazil, São Paulo’s automated modern subway lines cost $1.6 billion. It had 11 stations, with fully lit automatic trains. In Singapore, 22 miles of track cost $4.8 billion, at $130 million per kilometer. With the $20 billion stolen, 10 states in Nigeria could have had fully functional, ultramodern subway systems!

With $20 billion stolen, Nigeria’s transport system could have had 200,000 luxury buses ferrying Nigerians around the nation.

Nigeria’s oil minister, Diezani Madukwe has blurted that if this stolen money is to be investigated, the Obasanjo government (in power in 2004) too must be investigated since this looting started since then. We have no problem with that. Late Yar’adua (in power 2007-2010) is dead, and though PremiumTimes reports revealed that Yar’adua actually repeatedly executively blocked this cold-blooded robbery, they can investigate him too if they want. We will find our money, every last kobo of it, no matter what it costs us. Many of us Nigerians will never rest till the culprits of such humongous theft are all thrown in jail and the key tossed in the ocean. May this investigation spiral to all old regimes all the way back to our first, we will investigate this!

This is very depressing. Rivers state governor, Rotimi Amaechi told us that it is because we do not protest like every other nation on earth that such insane robberies can occur in broad day light. Are we sitting down with this wicked nonsense?

Let the FGN/NNPC be prepared for a full public investigated investigation and #OccupyNigeria! The thieves who stole our $20 billion will spit it out! Enough is Enough!