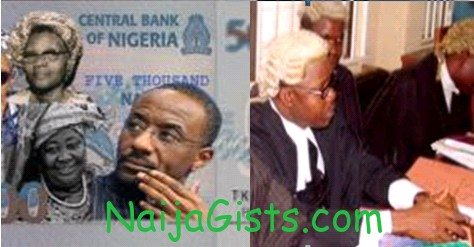 The Nigeria Bar Association, NBA, on Thursday in Abuja, continued its criticisms on the proposed N5,000 and called on President Goodluck Jonathan to sack Sanusi, the Central Bank of Nigeria Sanusi and other top management of the apex bank for their insistence on going ahead to ahead with the controversial currency reforms. naijagists.com

The NBA also backed the Federal Government over its stand on the Onshore/Offshore dichotomy noting that the matter has been settled by the Supreme Court.

Mr. Okey Wali, a senior advocate of Nigeria and President of the NBA made the call for Sanusi’s sack at the association’s Bar Leaders summit and noted that all indices show that Nigerians do not want the N5, 000 single note.

Wali observed that even if the leadership of the CBN are right in their postulation on the benefits of the proposed currency reforms, they are still bound by the wishes of the people or they should take the Honourable part of resignation rather than exhibiting such unbridled high level of arrogance and rudeness.

“For all the faults that may be identifiable in President Goodluck Jonathan, arrogance cannot be said to be one of his attributes. The NBA is therefore amazed that this high level of megalomania is going on under his watch. We therefore call on the President to please do the needful, initiate the process of the removal from office of the leadership of the CBN. On our part we will keep our promise to go to court to challenge the implementation of the policy should the President fail to reign in the CBN leadership” he declared.

On the orchestrated campaign by some northern governors to resurrect the issue of the onshore / offshore dichotomy to with a view to seeking for an amendment of the law on 13% derivation, the NBA President emphasized that the matter has been settled by the highest court in the land, the Supreme Court in an action instituted by the Attorney General of Adamawa state and two others against the Attorney General of the Federation and eight others in 2005, 18 NWKR part 958 at page 58.

“We condemn the attempt by some politicians and their sympathizers to deliberately overheat the polity by resurrecting the matter. We recognize that this is nothing but an attempt at distracting Nigerians from insisting that they deliver on their campaign promises. They have been elected to deliver on the promises they made to the electorates and we think they should concentrate on that and desist from any calculated attempt to distract and deceive the people” he stated.

He reiterated the call on government to intensify efforts towards enhancing the safety of lives and properties in the nation, which he noted, is the foremost responsibility of government to Nigerians

Chief Afe Babalola, a senior advocate of Nigeria, whose paper was read at the event by Prof. Akinsheye George, SAN, called for the appointment of Judges from the rank of Senior Advocates of Nigeria to ensure that only the most qualified, experienced and knowledgable practitioners of law are appointed to the bench to make our jurisprudence better.

Babalola noted that in the past that judges were highly respected and were regarded with great awe but not any more. “It is now a common sight to find judges at social occasions. Due to the economic realities of the time which has affected even judicial officers, it is not uncommon to find Magistrates riding in taxis and other forms of public transportation.

The point being made here is not that judges and other judicial officers must live in a state of utopia irrespective of the realities of the day, the point is that these developments increasingly expose judicial officers to risks from litigants and even accused persons standing trial before their courts. Little wonder then that claims of corruption, bias and judicial high-handedness which hitherto were virtually unknown or unheard of in the country’s judicial system are now a common phenomena”.(pmreports)