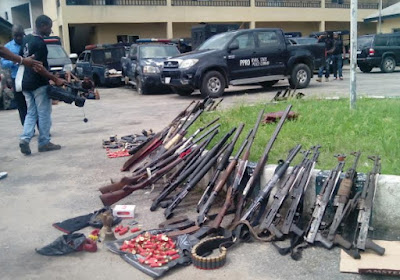 In a major sting operation to checkmate corruption and professional misconduct within and outside the police, the authorities have arrested nine policemen for aiding and abetting serious crimes.
The nine policemen were paraded today at the Force headquarters Abuja.

The dismissed officers were found guilty of unprofessional conduct, aiding and abetting serious crimes like cattle rustling, robbery and kidnapping in the Northeast.

According to the police statement, interrogation and confessions of the dismissed policemen also led to the arrest of principal suspects and recovery of many arms and ammunition.

The police also disclosed that in October, 2016, one Alhaji Hodi Adamu, a notorious armed robbery suspect was arrested by the police in Adamawa State.

The suspect’s confession led to the arrest of two other suspects namely: Rabo Bello and Oliver Honiol whose voluntary confessions led to the arrest of the nine police personnel mentioned above for various roles they played through their actions and inactions which are considered as disciplinary infractions. The principal suspects and the dismissed police officers will soon be charged to court.