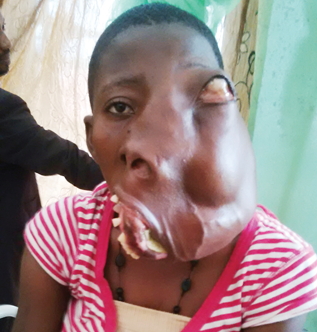 A 20-year-old cancer patient, Nancy Ukaha, is in desperate need of N1.5 million for Cranofacial Fibrous Dysplasia surgery at the University College Hospital (UCH). Nancy, who has been battling with cancer for 12 years, is presently on admission at the UCH. Nancy, according to her distraught parents, Mr Donald and Mrs Rose Ukaha, had earlier in 2014 undergone a major surgical operation at an Abuja hospital only for the small protrusion that initially emerged on her fore-cheek below her left eye to grow amorphously, degenerating into her present condition. According to the diagnosis by the doctor who attended to her, Nancy has features of “tearing of the eyes, bleeding of the gum and teeth”.

After the Abuja surgery, Nancy told our correspondent at the South West 1 Ward of UCH that there was a mild improvement which later escalated, necessitating her referral to the premier hospital last week. She said that she had the seemingly non-malignant infection when she was eight years old, but as years rolled by, the small protrusion started growing bigger and became cancerous, thus affecting her entire face and the buccal cavity. Narrating her ordeal in a muffled speech, Nancy said: “I am 20 years old.

I hail from Makurdi in Benue State. I did not go to school. This problem started 12 years ago while I was living with my Anty at Egbeda in Lagos State. This thing started with a small protrusion below my left eye. But it gradually aggravated to the extent that a major surgical operation had to be performed on me at an Abuja hospital in 2014. “There was a mild improvement after the surgery, but later it started getting worse.

I came to this hospital once last year on appointment and went back later. On September 15, we had to come back to this hospital and I was placed on admission.” Her 40-year-old mother said she and her husband were farmers.

Rose said her husband was not in Ibadan but she was struggling to save their daughter from the jaws of death. She said: “The doctors here are ready to perform another operation on my daughter, but what we will need for the surgery is N1.5 million. We are poor farmers and we don’t have any money to foot the bill.

“We appeal to the good people of Nigeria to help us out so that my daughter will not die. We have suffered a great deal for many years and we have spent all our earnings on this ailment.

“We urge all kind-hearted people to assist us to raise this money so that the operation can be performed very soon. My prayer is that God will replenish the treasury of whoever is touched to assist us in this difficult period.”