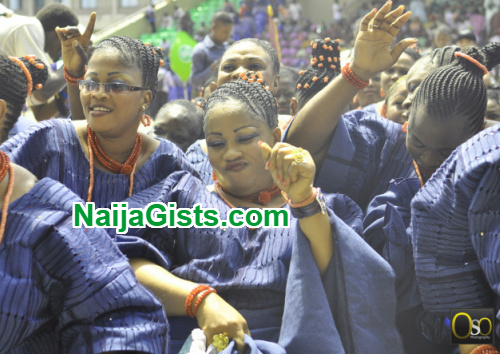 A native of Awa Ijebu in Ijebu North LGA of Ogun State, Mrs. Abiola Afolabi, has appealed to relevant government agencies and security organisations for security and protection over her life and those of her children from constant threat, harassment and intimidation from a dreaded group known as Olobinrin.

The mother of two says her ordeal began on January 13, 2016 during the burial of her late mother when the occult group stormed the venue of the burial and attempted to initiate her into the evil club. Noting that she refused to be initiated, she explained that the group disrupted the burial proceedings and went away with the corpse on the claims that the deceased was their member.

She further narrated that the matter was reported to the police and that the matter is still being investigated, but as at the time of filing this report, the police haven’t brought the culprit to justice. Afolabi said members of the group have continued harassing, threatening and coercing her for initiation into the cult.

She claimed to have been spiritually attacked and had a terrible experience in the hands of this dreaded group, as she had a miscarriage and lost a six-month-old pregnancy. She also noted that her husband who was advised by his family members to run for his dear life had abandoned her.

Already she has gone into hiding with her two children after being abandoned by her husband who had disappeared into safety. She is therefore, appealing for security provision for her and her children so that she can go about her legitimate activities.

“The notorious cult group in Awa, Ijebu, the Olobinrin want me by all means and at all cost to be initiated into the group even against my wish. They claimed that it is a right of inheritance, since my mother was a member of the group before she died.

“But my Christian faith would not allow me to ever be a member of a cult group. I am a good Christian and a member of the Redeemed Christian Church of God and it is even written in the Bible that thou shall not serve God and mammoth”, she said.