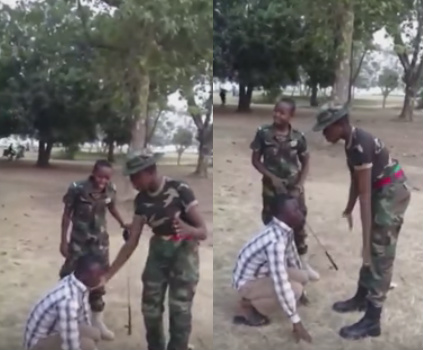 The Nigerian Defence Academy has released an official statement on a viral video of some Cadets caught beating a man somewhere in Lagos.

NDA claimed that the video is from an incident that happened back in 2014.

See the official statement below and watch the video after

“The attention of The Nigerian Defence Academy has been drawn to a trending video showing Cadets beating some persons. Please note that NDA is investigating the incident. Preliminary investigation has confirmed the incident to have occured in 2014 somewhere in Lagos while the Cadets were on break. NDA as a responsible institution saddled with task of producing future military leaders will not in any way tolerate such unruly and flagrant mistreatment of Nigerians. The NDA under current leadership has addressed most disciplinary loopholes. Further investigation is continuing. Please assist and circulate.”

Hope these ones can be identified and brought to justice.