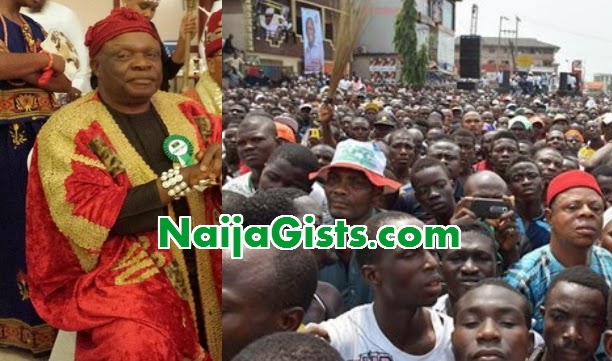 They urged all Ibos living in Lagos to vote for APC because the party will protect their interest both in Lagos State and Nigeria.

Eze Ndigbo, the leader of Ndigbo in Lagos State, Christian Uchechukwu Nwachukwu said this during a press briefing that held yesterday in Festac town.

Eze said he made up his mind to endorse the change agents after his consultation with all stakeholders of Ndigbo resident in Lagos.

He, therefore asked his people to vote for APC from the ward level to the national level.

“Igbos were appointed as commissioner, board directors, personal assistants, supervisors in both in local governments and state government,” he stated.

He disclosed that Igbo leaders have extracted a commitment from Ambode to accommodate more Igbos in his administration if voted into power.

Eze Ndigbo said that the Igbos in Lagos will soon stage an independent rally to mobilise other groups to vote for APC.