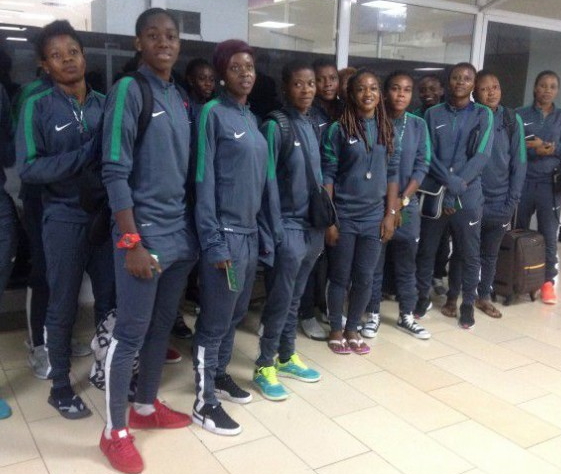 Sources at the meeting told New Telegraph that the meeting almost ended in fiasco as the players vowed to remain at the hotel until their money is paid.

They even grabbed the trophy they won and vowed not to release it until they are paid. “Pinnick was trying to pacify the players to exercise patience that they will be paid soon, but they (the players) asked him to be specific and the manner those of them asked the question got the NFF boss angry,” a source who was at the meeting told New Telegraph.

“The NFF boss was not happy with the way the stars were handling the issue and made some statements that also infuriated the players. I won’t tell you what Pinnick said because it is better you people don’t write those things.” The NFF General Secretary, Dr. Mohammed Sanusi, had earlier visited the team and also begged the players to be patient.

He attempted to give them N50,000 each as transport fare which they rejected. One of the players, who did not want her name in print, said they would stay until concrete arrangement is reached on the payment.

“We are aware of what happened to the U-17 and U-20 female teams who left with empty promises and we do not want to have the same experience.

Before we left there were promises they made and until they fulfill them we will remain in this place,” she said. In a statement released by the federation, Sanusi was quoted to have said at the meeting that: “I have come to appeal to you, to understand the situation of the federation and the country at the moment and exercise patience.

“We will pay you all monies you are being owed as soon as we receive same from the government, just as we paid the U-17 boys who won the FIFA U-17 World Cup in Chile last year, after the tournament.

And just as we sorted out Coach Samson Siasia’s wages as soon as we had the funds, after the Olympics.” He added that: “We know we have financial commitment to you (players and officials of Super Falcons) and we have not at any time stated otherwise. But the money is not readily available at the moment.”

Sanusi said the NFF had embarked on aggressive drive to find a permanent solution to the issue of owing players and coaches. “In relation to all these, we are in the process of sorting out our TSA domiciliary accounts so that we can receive our due grants from FIFA and CAF, including the $80,000 prize money from the AWCON, once it is available.”

Meanwhile, Sanusi has confirmed that the NFF is waiting for words from the Federal Government on when the African champions will be hosted to a state reception.

“The reception is out of our hands. We are waiting on the Federal Government, and as soon as we have confirmation of the date, we will inform the players and officials to regroup in.