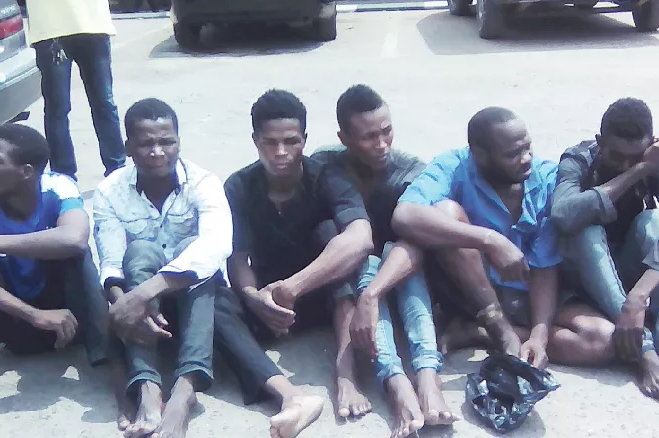 February 27, 2016 – Niger Republic Citizens Arrested For Robbery In Lagos Confess “Our Parents Believe There Is Money In Nigeria”

It was gathered that the suspects were all working as porters at Balogun Market before they met one Isa Musa from Borno State who introduced them to robbery.

But Musa said he met the men at Obalende when they asked him to take them somewhere. He said:

“I have spent about 15 years in Lagos. I was once a motorcycle rider.

But my motorcycle was impounded about five times by the police that was why I bought a Toyata Sunny car which I used for transportation.

“The boys have been into the robbery before I met them. I joined them about two months ago. I have also shared about N140,000 from the proceeds from the two the operations he went for. Our major target is warehouse.

Our last operation was at Mandilas Mall before we were arrested by the police.”

The gang leader, Alisuma, said he used to call Musa on the phone whenever his members wanted to go for any operation.

He said: “Whenever we went on operation, my own work was to use sledge hammer and other tools to break doors, while my colleagues who were armed with machetes would go in and steel money and some other valuables.

We have robbed at Mandilas Mall and one other warehouse at Tinubu area of the Island. I also used to instruct my members on what to do because they do not understand the Island routes very well.

“I came to Nigeria to work but because my expectation was not met by working as a porter at Idumota, my colleagues and I decided to go into robbery so as to be able to send money back home.

Our parents believe there is money in Nigeria that was why they are expecting much from anyone of us who come to Nigeria.”