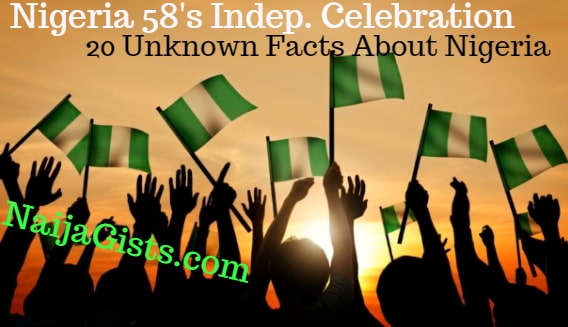 To celebrate our independence today, we have decided to take you through dark paths with a torch.??.

Here are 20 facts you don’t know about Nigeria!

1) Nigeria is the most populous country in Africa

Seeing this at first, I also thought it is some sort of joke not until I researched more and found out this is actually true. Nigeria indeed has more people than any other country in Africa!.

2) Nigeria has more than 250 ethnic groups

To crown Nigeria’s population is diversity in languages. Nigeria has over 250 ethnic groups!.

I bet you only know the Yorubas, the Ibos, the Hausas, the Ijaws etc, have you ever heard of the Gbayis, the Affadas, the Amos, the Banks and so on!.

Nigeria’s River Niger is West Africa’s longest river spanning about 4,180km from its source in the highlands of Guinea in South Eastern Guinea. It is largely known as the Niger Delta or the oil’s river.

4) Nigeria is one of the oldest location of human existence

From archaeological reports, it has been discovered that Nigeria is one of the oldest location for the first humans on earth as existence in Nigeria has been dated back to as far as 9000BC.

5)  Nigeria has the world’s largest diversity of butterflies

So you think the world’s first and best belongs the UK,USA and the likes?, let me give you a shocker!. Nigeria boasts of the world’s most colorful creatures, butterflies.

It is widely believed that this is found in Calabar, Cross River State and other southern part of Nigeria.

6) Nigeria has the longest bridge in Africa

Nigeria’s Third Mainland bridge in Lagos state is Africa’s longest bridge. It measures around 11.8km and was built by Julius Berger Nigeria PLC and opened by former Military President, Ibrahim Babangida in 1990.

Yes you read that right. Nigeria produces averagely 2,525,000 barrels per day making it the 12th largest producer of oil in the world. Not only this, Nigeria is also the 8th largest exporter of oil

and the 10th largest petroleum reserve worldwide. This is why Nigeria has over 300 secret oil billionaires and counting till day.

8) The Richest man in Africa is a Nigerian

When you see your Dangote sugar, Dangote salt,Dangote cement etc you already know this man. Aliko Dangote is unarguably the richest man in Africa and he is a Nigerian!.

Folks what excuse have we got?.

Even the world’s Muslim seat can compete with us!,you read that right!.

Do you need me to say more?, proudly Deltan!.

12) The Nigerian movie industry, Nollywood is the second largest producer of movies in the world

About 200 movies are produced in Nigeria every week!.

The walls of Benin dates back to the existence of first humans in the world.Yes,it is that old!

14) The indigo birds are found only in Nigeria

The beautiful indigo birds are only found in Nigeria, Jos precisely.

Agbani Darego name is written in gold as she paved way for the country and in fact the whole of Africa in the international scene by being the first Africa to win Miss World Beauty Pageant in the 90’s.

Yes, Nigeria’s mangroves are that large!.

This fact is funny at first but then lets look deep and see within, truly the world happiness report of 2017 did not lie after all.

Of course we can’t argue this fact, with virtually all businesses on Instagram, almost all on Facebook, morning tea on WhatsApp…need I say more???

Nigeria’s monument, Sungbos Eredo is the largest in Africa. It took over a million man hours to build than Egypt’s great pyramid of Giza.

#20. Lagos state, Nigeria is the largest growing city in the world

With a growth of 85 people per hour in this cosmopolitan city,one can’t think less!

Now there you go, so which of these facts are you aware about before hand?.Share your thoughts and comments!.