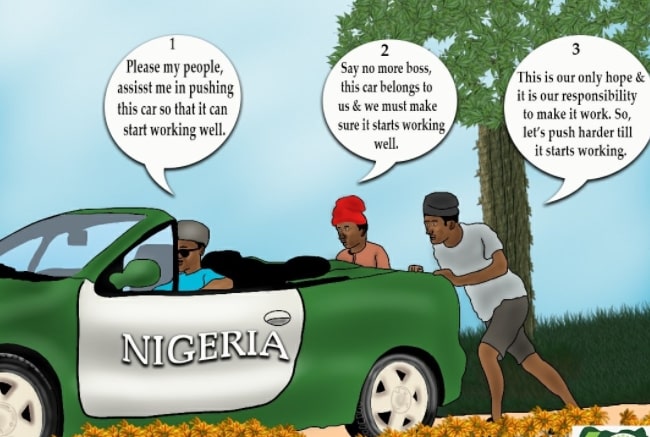 Nigeria, a country at Ground Zero
An article
By
Tony Ogunlowo

When you look at Nigeria today you see a replay of the ‘Wild, Wild West’ of America in the 1800s when anarchy, lawlessness and the near non-existence of a central government existed: cowboys and Indians were killing each other; slaves were worked to death on plantations and the few rich were getting fatter – and dangerous – as feudal lords.
Fast forward to the year 2022, another country, Nigeria, in another continent, Africa, is embarking upon the same journey.
Insecurity is the word on everybody’s lips: bandits, kidnappers, robbers and killers roam the land and commit crimes with impunity.

Unemployment is the second word that comes to mind: millions of people who should be in work are unemployed. As is to be expected to make odds and ends meet many will turn to crime.
And then you have the feudal lords, the untouchables who are the politicians and the ones who have acquired their wealth through questionable means. With their money they control their fiefdom with an authority nobody dare question for they have the politicians, judges and members of the armed forces in their pockets. For them they’ll have three square meals a day, in peace, even if Hell freezes over.
And that brings me down to the general populace, the common man, the canon-fodder for the Rich and Almighty, whose lives are just a little better than a slave working on a plantation of another age.
2023 is just around the corner and the sugar-tongued politicians are going to come out in force promising a mythical better way of life if elected to power. The truth is all their utterances will be a pack of lies: they can do no better than their predecessors!.
Nigeria is a country at Ground Zero: a country in ruins where nothing works. There is no clear running water; constant uninterrupted 24 hours electricity supply is still a distant dream; a majority of the roads are pot-holed and not maintained; the populace lacks basic healthcare; employment opportunities are limited and the life expectancy keeps on dropping.
When a country is dead, or dying, you don’t come into office promising to move heaven and earth to fix everything overnight. You come into office to face the reality of things: that the house you’ve been brought in to run has been demolished and is in ruins at foundation level. How you’re going to build up that house again from the ruins is the task at hand. Any other promise is BS.

So, can the country pick itself up from its present predicament? Perhaps.
There’s talk of splitting up the country in the hope it’ll aid development and put an end to all problems. Again, I’ll say ‘perhaps it’ll work and perhaps it won’t’. There was a time when Northerners, Southerners, Christians and Muslims all lived happily side by side (- am I that old?): politicians then set one against another and not the people. It’s also worth noting that at one point or another, in their esteem histories, great nations such as Great Britain, America, Russia and even China were at ground zero. But they were quick to realize their countries were going down the toilet and embarked upon programmes to build themselves up from scratch instead of burying their heads in the sand pretending everything was okay.
Healing and the road back to redemption only starts when you admit you have a problem: Nigeria and Nigerians will never admit they’ve got a problem and will forever pass the buck, blame other tribes, religions and current and past governments: the country looks like the aftermath of Germany at the end of the Second World War! Admit it and the re-building can begin but you can’t have that while all politicians play the fiddle while the country burns.

You don’t end insecurity in the country by gunning down every bandit in sight because for every one you kill another ten will rise up. And why is there so much insecurity in the first place? Because there are no jobs to keep people out of mischief. Why are there no jobs? There are no jobs because places of employment don’t exist or are not enough. And why are there not adequate places to employ people? Because the basic infrastructure (- power, telecommunications, good roads and security) don’t exist and this scares away potential investors.
So, to re-build a nation you have to think of the many buildings that have collapsed in Lagos recently: clear away the rubble, figure out what went wrong, make new plans and build a new building with a solid foundation with rigour.

So, who is going to be the President of Nigeria in 2023? Tinubu? Saraki? Atiku? Are they going to come into office realizing the country is at Ground Zero and they’ll have to build it up from the ruins or do they just want to be President, for personal reasons, so they can add another cap to their Curriculum Vitae?
I rest my case.