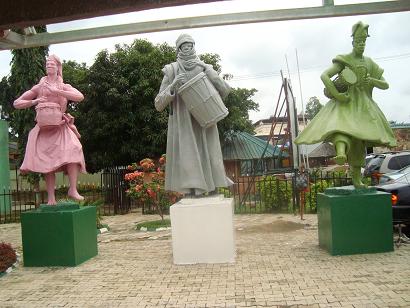 Nigeria is a blessed country – home to over 170 million people. Nigeria houses many tribes, languages and ethnic groups. Hausa, Yaruba, Igbo, Kanuri, Nupe, Tiv, Ibibio, Ijaw, Igala are just a few of the over 360 tribes and languages in Nigeria. Some ethnic groups have collapsed into the major regional tribe, while many are not significant in respect to the population. There are many religions in Nigeria out of which Islam is believed to constitute half the population. Christianity account for about 35 percent, traditional religion, and paganism, account for the rest percentage.

Nigeria has celebrated it 54 years anniversary of independence. It is sad that even after these, the sense of patriotism is very low or even non existing. Civil war was the first major problem that divide Nigerians. Though even before that, the election and census of 1963 causes a lot of tension in the country – especially in the South West. The Gideon Okah unsuccessful coup – where they intended to remove the all Hausa lands from Nigeria was one thing that further manifest our differences. The aborted and nullified Presidential election of June 12 was perceived by some Nigerians as North against South. Against all odds,

Nigeria is still a single country and elections are still been held after 4 years since from 1999.
The bi-religious joint ticket was first institutionalized in Nigeria politics in 1960 after independence. Ironsi was given the position of head of the military because of religious politics. Also in 1979 when the military handed over power to civilians. Shagari been the President – was a Muslim from the North and his deputy a Christian from the South. Though it didn’t survived long as the government was overthrown in 1984. since 1999 after the return of democracy, both the PDP and the opposition fielded are joint religious ticket. Obasanjo was with Atiku up to 2007. Then Yaradua-Jonathan-Nmadi came from 2007 to date.
In 2011, religious politics manifested it self as a major influencing factor in Nigeria. The PDP went ahead with its bi-religious arrangement. So was the CPC. Thought the CPC candidate has for long been leveled by some mischief makers as a bigot, but still they went ahead with a Muslim-Christian ticket.

Now that it is only about 4 months to elections, religious politics has resurfaced again. The ruling PDP has given Jonathan-Sambo automatically endorsed ticket. While the major opposition party the APC has is yet to field its own. There are indications that the APC is considering giving the Presidential seat to a northerner. Former Head of State General Buhari has already declared his intention to run for the office of the President under the APC. Some reports have it that the some influential supporters and loyalist of the General are making arrangement for Gov. Fashola of Lagos state to run together with Buhari. To me, this is a very good idea as both the men are tested and trusted. If the two men finally agreed for Buhari/Fashola ticket, that will be a Muslim-Muslim ticket. If I happen to be Gen. Buhari, I will surely choose Fashola.

Considering the known voting pattern of Nigeria, population of the regions where the 2 men came from, and their teaming political supporters, I will surely go for Fashola. I will rather damned the political consequences than compromise. Gen. Buhari should also consider the fact that Gov. Fashola is middle age level headed politician, as such, will be loyal and easy going. From the North also, former Vice President Atiku Abubakar has indicated his interest to contest Presidential elction under the APC. Atiku is yet to name or show sign of his running mate. Kwankwaso has alleged that federal government is blocking his declaration, no sign of his running mate also. Other parties with the exception of perhaps 6 may not likely field in candidates.

It is unfortunate that everything in Nigeria is politicized. Our sense of patriotism is very low if not – not existing. What is there if Jonathan is to choose David Mark as his running mate? Is same religion but different region, different tribe, different language, and different background also.

In politics, what matters is majority. If Jonathan-Mark can bring success to PDP why not try it. If Buhar-Fashola will be a formidable ticket that will bring success APC then why not they do it?

In politics, politicians should know that they must be castigated, that is the nature of politics. Whether bigotry, nepotism or what ever false claims they will put upon you, a politician must remain ideological, focused and determined if he wants to succeed.