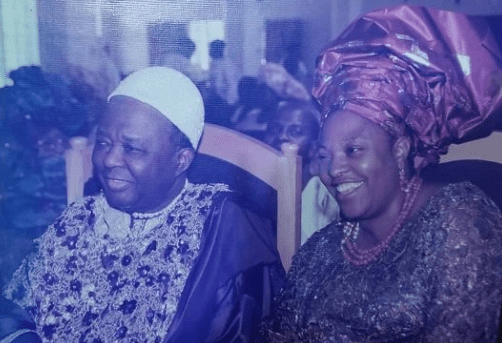 By Gbenga Aderanti, The Nation

Queen Odunola, the vivacious wife of the late Ooni of Ife, Oba Okunade Sijuwade, was in her elements when she went with her children to the 4th memorial lecture of the late monarch.

At the event organised by the Maye of Yorubaland, Dr. Ramon Adedoyin, at Oduduwa University, Ipetumodu, Osun State, GBENGA ADERANTI engaged her and she spoke about her love life, her growing up days and aspects of the late Ooni’s life many people did not know about.

I grew up in the palace at Ila in Osun State where my late father was the Oba for more than three decades. He was His Royal Majesty, the Orangun of Ila, Oba William Adetona Ayeni. I was the youngest child when my father ascended the throne in 1967, so I had a fun-filled childhood.

How has life been without your late husband?

Of course, when you lose a loved one, life can never be the same. But I give glory to God who has been my strength and sustenance.

What are those things you are missing about him?

I miss his love and his sense of humour and kindness. He was a very compassionate man. Kabiyesi (Ooni Sijuwade) was such a caring husband. He was helpful to me. He brought me up. He was my benefactor. I’m missing so many things about him.

He was very jovial. Each time he talked to the children in Yoruba and they responded in English, he would ask, ‘don’t you want to be versed in Yoruba?’ He didn’t like people speaking English around him, especially his children. He wanted them to understand the language and know it.

How has been the traffic of people around your house since he passed on?

I miss that too because there were so many people coming. In a day, I could receive hundreds of people. People who wanted to see him but were not able to do so would come to me to seek advice or get me to talk to him concerning them. That was because the palace was open to everyone. At times, he would refer them to me, saying ‘go and see her for whatever you want.’

Well, we thank God, it is like he had prepared for this. We have never lacked anything. Even some people we did not know when he was alive, they come to us. God has been good to us. 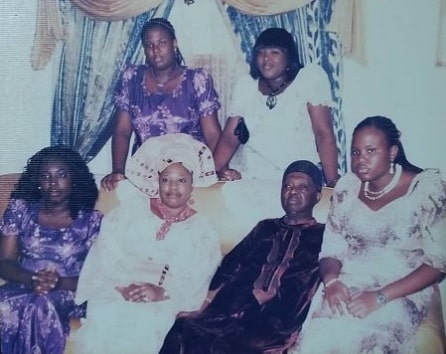 Ooni & Oduola with their children

How did you meet the late Kabiyesi?

Although he was my father’s friend and he was always at my father’s events at Ila, I was never introduced to him by my father and he would not even allow me to come near him. I met him through a friend… My father did not find it funny at all. If I had not been pregnant, he would not have allowed it. But he eventually agreed.

What were those things that attracted him to you?

His humility and his larger than life personality.

What was it like getting married to him, considering the wide gap between the two of you in terms of age?

To be honest, it wasn’t easy at first, considering the fact that I could not call him by his name. I had to kneel down to greet him. But I got used to it with time.

How was it like staying in a polygamous home?

Remember I was coming from a polygamous background, even though it wasn’t in my plan to marry into one. But when I found myself in it, the experience from my father’s house and my mother’s advice and support in the early years helped me tremendously.

What is that thing you are not likely to forget about him in a hurry?

His wisdom. He was a very wise king. Baba was a peaceful person. At times, I hear people talk about him as if he was wicked. The thing is that he had this aura such that when you see him, you cannot but respect him, even when he is in the house. I remember during the Ife-Modakeke war, he never liked it. He never liked bloodshed. He even said they were our children.

Tell me about your low and high moments as the wife of a monarch?

My lowest moment was losing both my parents within six months. My highest moment would be when I gave birth to my first child.

What are the other side of the late Kabiyesi that was not known to many people?

He was very romantic. He bought nice things for us. He would buy us nighties. He would say, ‘I travelled and I saw these nice nighties and I bought them for you.’ There was a time he travelled and he bought these nighties for me, and I said, ‘what is this?’ He said, ‘you will be wearing it.’

Again, there was a time they made oranges for him and he was sucking it. When I came back, he left mine for me and he said, ‘Madam, this orange is very sweet, you need to taste it.’ When I said no, he said, ‘No, you must taste it. Or should I feed you?’

Whenever we travelled, maybe to London, he would just come up with an idea, ‘Let’s go to one hotel to enjoy ourselves,’ and when we got to the hotel, he knew so much about food. He would look at the menu list and he would say, ‘You haven’t taken this my dear; we are going to order for it. I’m sure you are going to like it.’ Things like that. He would take me and the other wives to lovely places.

He was down to earth. Very humble. Whenever we went to church, he would be greeting people, ‘Well done sir, well done ma.’ He would want to greet everybody that passed by.

Whenever a traditional ruler came to the palace, even if Kabiyesi was already in bed, wanting to rest, as soon as he heard that an Oba was waiting for him, he would rise up, saying, ‘He is an Oba, I have to see him.’

I learnt so many things from him. He used his position to help humanity. He was a very generous giver. There was nothing he could not give out, especially when they give him gifts, he would give them out. Assuming we were travelling and people were selling in the rain, he would say call that person. What is he selling or how much is it going to cost? Some hawkers, everything they had on them would be like N10,000, but Kabiyesi would give them N50,000.

There was a guy selling walking stick. He was in the rain, and Kabiyesi asked how much was he going to gain from this? And he gave the guy a bail of N100,000. That was how the guy prostrated on the expressway. He liked to make people happy. He never liked to see people sad. He loved Ife to a fault. He just wanted everything good for Ife.

Some people say he was religious…

He knew God, he loved God and revered God. He was a prayerful person. Whenever we travelled, before leaving the house, he would pray. On getting to our destination, baba would lie flat on the floor and he would praise God. The following day, we would fast for God granting us journey mercies. He loved fasting. That was the power behind him.

In dressing, Kabiyesi was a powerful dresser. He was a fashionista. He taught me how to match colours at times. As a woman, I am supposed to know colours, but at times, if I matched things for him, he would say, ‘No, no, no, it is not like that.’ He knew how to match colours and things like that. Since he died, I’ve not seen any Oba that can match his dress sense.

Is it true that widows of monarchs don’t remarry?

Nothing stops us from remarrying. It’s based on individual preferences.

If he comes back, would you still want to marry him?

Well if it is like that, if people come back to life, I would still love to meet him as a father and as a husband, because he was a good person, loving, generous and very caring.

Continue Reading
You may also like...
Related Topics:ife, King, most, nigeria, ooni, Romantic