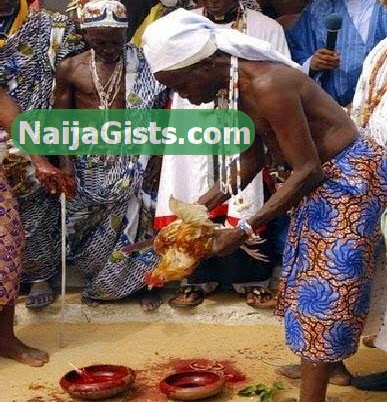 Message from the pure heart to the President, President Goodluck Jonathan

There should be a constitution that writes off witches and wizards!

If you consider the vices of witches and wizards, what do you get in return? In nigeria police station, the police will say, we don’t arrest witches and wizards. Then who now takes care of their havoc, atrocities and crimes committed?

We all know very well that before the bill was pass on criminals and all those involve in its activities in what ever forms, the ancient persons who do not have any written constitution, does their justice by hanging or beheading any one that was caught in its act.

Equally, witches and wizards were not left out in this part of the world where they were known solely for their evil, atrocities and no good at all, and so if they are caught, they also apply same justice: hanging, setting them ablaze, beheading them or sending them to evil forest.

People of Nigeria, I don’t know if things has change for this types of persons who were known and considered as very destructive and as a result were considered very wicked not to leave with man in same environment, and unaccommodating. Are they now repented, good, or they don’t use their evil practices on innocent persons; such as oppressing, killings, stealing of private organs, and doing all abominable acts that classify them as very dangerous persons, no matter who they are to the family; father, mother, wife, child etc they were truly judged and sentenced more than the criminals who stole goat, money etc.

If nigenians love themselves and their country, although I don’t know how they can effect changes and straighten issues, now that they have them (the witches and wizards) in government, politics, administration, religion etc, but they must go back to their fathers way of eliminating these very dangerous and hazardous persons in the community.

Let me remind the nigerians that those who helped them have in book and pass bills on the ways and manner to judge criminality do not truly believe in all that practices at that time, and they do not know the measure of evil that this types of persons effects on their community and people, if not, they would have probably have the same bill passed.

And if measures are not taken now to pass this bills and bring to book, the ways and manner of eradicating this persons (witches and wizards) from their community, it will truly be ridiculous, tremendous and terrifying when nigerian population have over 97 percent of their children/population possessed of witchcraft that breeds so many dangerous cults, organizations (either religious or informative).

LET ME BELIEVE THAT A MESSAGE HAS BEEN PASSED!

WHAT GOOD WHERE THEY KNOWN FOR? WHAT GOOD DID THEY PREDICT? known to fly with what, when you truly see them confess, what good do they confessed they have done except evil, atrocity and down-grading tales.

nigerians should not expect US, Canada, or other foreign diplomatic mission, government to do this for them, THEY HAVE TO DO IT THEMSELVES! eradicate the witches and wizard among you!!!

The Bible, Qur’an and other religious Books forbids them: for example, the Bible says: suffer not witches to live… that means punish them until they die… that is to tell you the measure of their evil and how much God hates them!!!

[By Victor S aka Pure Heart]

[Disclaimer: The views expressed in this email are those of the author and do not necessarily represent the views of & editorial policy of NaijaGists.com]