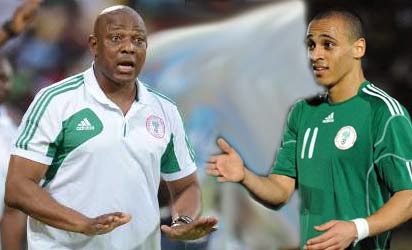 The coach of the Nigerian Super Eagles has come open to defend his team 24 hours after their boring performance against Iran during the 2014 World cup in Brazil.

Keshi blamed Stoke City striker Osaze Odemwingie for not playing to instruction and that he caused their setback.

He said, “The Osaze you are talking about didn’t do well. Osaze did not play to instruction and that affected the team.”

Osaze on the other hand defended Super Eagles performance during a BBC interview.

“We expected three points from this game but everybody knows the most important game is between ourselves and Bosnia-Herzegovina. “Next game I think will be easier and I think that will be the decider of where we will be at this World Cup.” – Osaze told BBC world

Hope they do better.