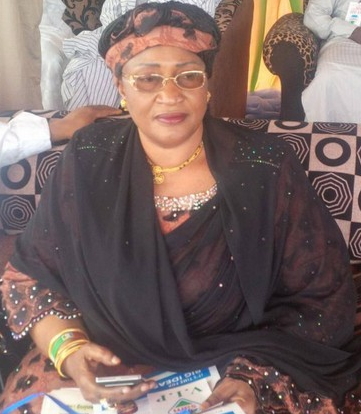 The female politician was on a 2-day official visit to the state when she slumped while delivering Buhari’s message.

But the episode that could have led to a national tragedy was averted by the swift intervention of her aides and camp officials who administered first aid on her.

It was gathered that barely few minutes after walking into the hall with the aid of crutches, Alhassan, who recently had an operation for an undisclosed ailment, slumped.

She was immediately assisted by some of her aides who got a chair and helped her to sit down on it.

Her aides, particularly the women, used their wrappers, bucket and dustbin covers and whatever they could lay their hands on, to fan the ailing minister.

At this point, journalists who were already inside the hall, were ordered to leave the hall by her security aides.

A camp source told journalists that some bottles of Coca-Cola were given to the minister, which she reportedly drank “to increase her blood sugar level.”

After she was stabilised, Alhassan was hurriedly driven out of the Fufore IDP camp to where she lodged to have a rest.