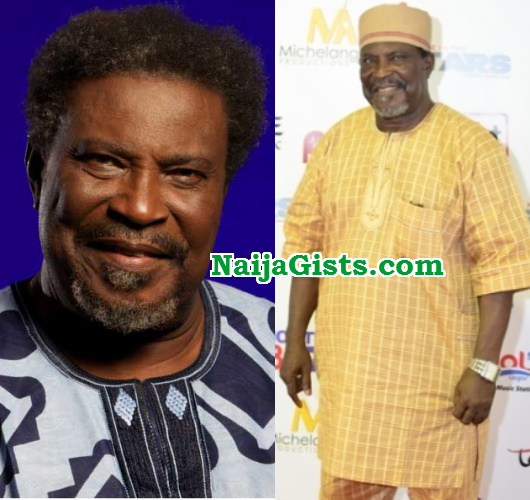 July 17, 2015 – Nigerian Actor Dejumo Lewis: I Hate The Name Nollywood, It Is What We Got From Colonialism & Brainwashing From Western World

Veteran Nollywood actor, Dejumo Lewis, who played the role of a paramount king, Oloja of Oja in the now rested NTA drama, Village Headmaster, will turn 72 on July 28, 2015. The famous thespian spoke to TS Weekend about his early life, religious and cultural beliefs, Nollywood, politics and other sundry issues. Enjoy it.

What’s your impression of Nollywood?

Let me say this for record purpose, I dont like the name Nollywood being used to describe the Nigerian film industry. Is it because the Americans call theirs Hollywood or because the Indians are so gullible to accept Bollywood from them? Indian films are now totally westernised, it is a deviation from the culture we used to admire that time. Nollywood is also westernised – from scripting, dressing and other things. Nollywood is total nonsense; it is part of brainwashing we get from the Western world and from colonialism. What is being espoused in Nollywood is western ideology, nothing cultural. That’s my grouse agaist it, though it has brought us to the limelight in terms of movie making.

You recently hit hard on Nollywood practitioners for being used by politicians to campaign. Why?

The past administration of President Goodluck Jonathan dented the image of Nollywood by giving them money to campaign for him. They also celebrated Nollywood at 20 shamelessly when the film industry started in Nigeria in the ‘50s.

Despite your popularity, you have not been given a national honour. Why?

I was given seven years ago when I turned 65, but I rejected it because I did not want to take a national honour from a corrupt government.

With your ideology have you really made money?

(Laughter) You don’t expect a person like me to make money. Let me tell you, I’m right now in debt to the tune of millions of naira. That’s why I have not been able to publish my book on communication and culture, which has been ready for over five years. I have tried to talk to people and organisations for sponsorship; at first they will be enthusiastic about it but they are always scared of the content.

And you are happy about that?

I am absolutely fulfilled, particularly when you are doing something for your society. There is that depth of fulfillment and I’m at peace with myself. I voted for President Buhari because I see a resemblance of me in him, but I’m dissappointed in APC, the party that is a proponent of change having internal fracas.

Are you happy that none of your children has stepped into your acting shoes?

When they were young they showed enthusiasm but later they dropped the idea. I’m happy they are successful in thier chosen careers. I have children who are lecturers, lawyers, economists and civil servants; I have another one in communication and advertising.

As a popular actor, what has been your relationship with women?

I love women; I love them (Laughter).

Where is the woman? (Laughter).

Chief Lewis you are not growing any younger but we pray you stay longer on planet earth. When you might have gone, what do you want to be remembered for?

As a proponent of sanitised world, a world free from corruption, injustice, perversion, and everything that is evil. I also want to be rememberd for being a man that fought for the rights of others; that liberated others from inhumanity to humanity.

How do you want to be buried when you might have gone?

(Paused and laughter). I prefer cremation because I hate the money being wasted on burial nowadays.