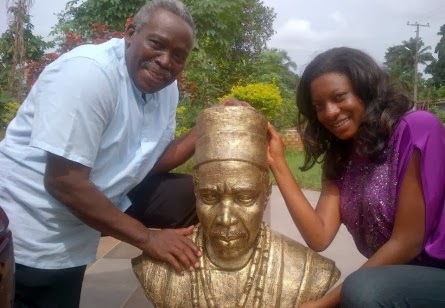 For his timeless contribution to the Nigerian movie industry, veteran Nollywood actor Olu Jacobs has been honoured with a bronze statue of himself.

Popularly called the grandfather of Nollywood, the actor has achieved great feats in Nollywood beyond the personal standard he originally set for himself.

Achieving legendary eminence never comes on a silver platter but that is what one of Nollywood’s icons has become.

Olu Jacobs who came into limelight in the mid 90’s when he starred in a hit movie titled “Day Break” alongsides Omotola Jalade Ekeinde and Emeka Ike has become a household name.

From the trademark roaring voice when he is angry and intent on creating mischief especially when he gets offended or his child goes contrary to his commands, to the sweet and fatherly affection he displays when pleased, Olu Jacobs has remained the same person and kept true to his core acting values that has made him beloved fans worldwide.

Months back, some of his colleagues and age mates who are legends in their own rights like Pete Eneh, Enebeli Elebuwa, Sam Loco Efe and Justus Esiri have died.

So it is worth at least recognizing his achievement over the years and bestowing on him an award deserving of his status.

Even before death comes knocking however, Olu Jacobs has already received a bronze sculpted statue of himself.

Olu Jacobs takes great pride in this statue because he definitely deserves it.

The actor is married to veteran actress Joke Silva and the couple have two beautiful children together.