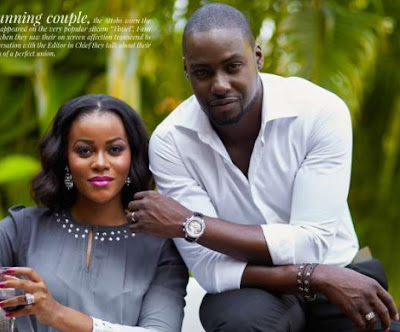 Tinsel Actress Damilola Adegbite who recently claimed that her marriage to Ghanaian actor Chris Attoh is untouchable has finally buried her shame.

Though she wasn’t the one who exposed the crack in their marriage, it was her husband who braced up to tell the whole world the true state of their marriage.

When the going was good, Damilola and handsome Ghanaian actor, Chris, were a hot item. They graced the covers of several magazine issues with hot, racy photos as their transnational romance flourished like well-watered green shoots. Chris proposed to Damilola on an Atlantic boat cruise in Manhattan in August 2014 and the duo tied the nuptial knot at a glittering ceremony on Valentine’s Day in 2015.

However, for some months, there were rumours of a strained relationship between the two. While their fans fasted and prayed like devout Christians on their behalf, Dami and Chris kept mum on the issue until a recent interview where the handsome dude confirmed their divorce.

Although the reason for their separation is not known, Dami has since reverted to her maiden name, at least on the internet.

The now single mother of one has also removed her husband detail from all her online profiles.

An insider informed NG that Chris Attoh has moved on with a US-based Ghanaian beauty Queen whose backyard endowment **bakassi** tripled that of Damilola.