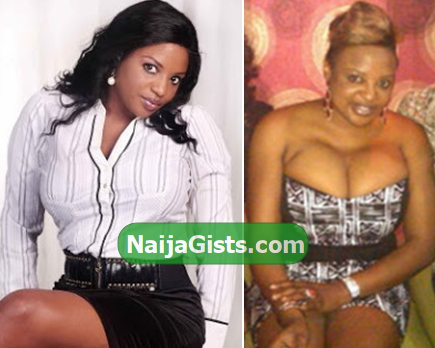 Nigerian actress Funke Adesiyan has joined the league of big Nollywood babes who are naturally endowed with the exception that her own endowment is artificial.

According to Nollywood insiders, the Yoruba actress recently lashed a whopping $7,000 on breast enlargement surgery to further enhance her look.

Though the now megally endowed actress has denied it, sources are still standing by their claims.

The insiders claim Funke Akinsinya has gone under the blade to inject silicon into her breast area in order to make her look more attractive.

In a recent interview with Nigerian Tribune, Funke Adesiyan debunked the story.

Below is what she said;

“I still wonder where such stories came out from, I am sure it might have emanated from some jobless people who see nothing else about me but my melons . It is not true of course; it’s an imagination of the person that carried the rumour. My melons are the same, no increase, no decrease, just normal as usual,”

The rumour became more intense when the beautiful babe was spotted at Club Octopus in Alagomeji area of Yaba Lagos state Nigeria with an usual heavy chest.

Another Cossy Orjiakor in the making Lol.