November 1st, 2013 – Nollywood Yoruba Actress Lizzy Anjorin On Why She Turns Muslim: I Left Christianity For Islam After My Father’s Death

Lizzy Anjorin: “I’m Half Muslim & Half Christian, I Reverted To Islam After My Father’s Death”

Never heard of people claiming to be half muslim and half christian before, this is the story of controversial Nollywood Yoruba actress Lizzy Anjorin who converted to Islam few weeks ago.

At last the actress has spoken on why she dumped Christianity for her newly found faith.

In a recent interview with City People magazine, hear what Lizzy said:

“It happened in a miraculous way which I have been expecting for long, not that I woke up yesterday and decided to change my religion. By birth, I was half Muslim and half Christian. My father was Christian while my mum was Muslim. Growing up I went to church because of my father. I didn’t have a choice at the time but I have always had interest in Islam so immediately my father died I switched over to my mum’s religion. It is a religion I love so much. Also Aisha is now my official name though Liz is still my name and I will continue to use the name to do movies.”

So in short, her mother influenced her decision to revert back to Islam. 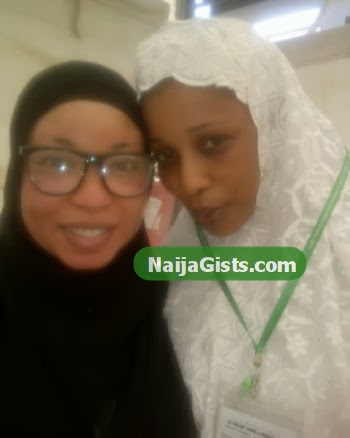 Above is a photo Lizzy Anjorin took with a friend, Kemi Akorede during a recent trip to Mecca.