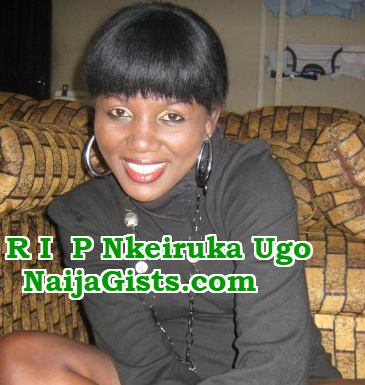 Nollywood lost a budding star in Lagos state this past weekend.

The latest victim of untimely death in the Nigerian entertainment industry has been identified as Husbands of Lagos movie star, Nora Nkiruka Ugo who lost her short time battle to Fibroid around noon on Sunday the 28th of January 2018.

A medical source who contacted us shortly after we released the exclusive story of her death earlier today said the actress died of Fatal Pulmonary Embolism after Uterine Artery Fibroid Embolisation (fibroid treatment surgery).

Her trouble reportedly started last year when she was experiencing heavy menstrual flow. She consulted doctors who kept giving her painkillers, unknown to them the actress had developed a huge fibroid that necessitated urgent surgery.

She reportedly went under the knife to get the fibroid removed only to develop complication that manifested in form of overwhelming pain and shortness of breath hours after the surgery.

The source said doctors did everything possible to save her life before she slipped into coma.

She reportedly had respiratory and cardiac arrest before doctors administered cardiopulmonary resuscitation(CPR) on her.

Sadly when there was no cardiac activity throughout the CPR, it was discontinued after sometimes before she was pronounced dead.

Autopsy later confirmed that she died of pulmonary embolism.

This is definitely not what her family members want to hear.

May God comfort them during this period and may her soul rest in peace.