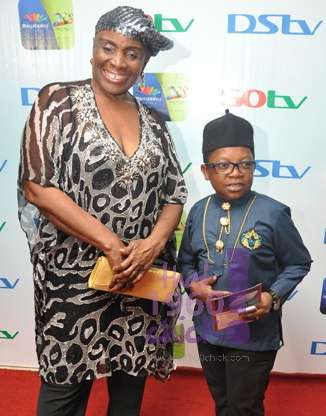 So, how did you get into acting?

I had a friend who was an actor. One day, I decided to take him to coffee while in the studio where he was working. The director, who was working on that set, then came around and asked if I was an actor, and I said no. Then he asked if I would be interested in acting in his production. I thought about it for a while. I usually had a two months holiday from work and what I did with it was to study. So I decided to spend my holiday time in giving acting a try.

That was how I went to join rehearsals. Then the play opened. After every show, people would come around to ask who my agent was. In England you are not allowed to act without being a member of the union. Till today, I am still a member of the Actors Equity Union of England. After one of the plays, an agent approached me and signed me up.

How did you meet your husband, Thomas Lycett?

By the time I met Tom, I was an actor and very popular in the UK and other countries. That time, I was looking for a place to stay and apparently, the place I got also housed many other people of art- poets, painters, actors, musicians, writers and the likes.

So I moved into the place. While moving in, the community there decided to have a party for me, welcoming me into the neighbourhood. Tom Lycett, at the time, was living in the area and was invited to the party.

Soon, we got talking and found out that he was a wellread man. He was a Cambridge man, a historian and I used to read prodigiously then. So we got along easily and there was always something for us to discuss. Some weeks later, he told me he would be travelling around the world soon, since he was in the oil sector. He was away for six months, but all the while he was away we talked constantly on the phone.

Our discussion was more cerebral than romantic. Through these calls, we got to know each other very well. So when he got back, it was as if we had known each other for ages.

But I liked him, in fact I loved him. I was very busy at that time and did not want any complication of a relationship. In fact when we got married, I was on tour at the time. After wedding in the afternoon, I was back on stage that same night. By that time, he had bought us a flat, which he had decorated very tastefully.

So when I finished the tour, I joined him in our new home. He was very romantic, very unorthodox and very special. Our relationship was very special; it was a union of minds. It wasn’t about sex, yes that was glorious later on, but what we shared was special. It was him who told me that I had to give up working in the civil service and concentrate on my acting.

What is your take on the Nigerian movie industry called Nollywood?

Is it true that it has elevated our movie industry? Already, some say it is churning out poorly produced works.

Nollywood gave the Nigerian entertainment scene a shot in the arm, and we must never forget that. At a time when nobody could go to the theatre because of security concerns and we just had a few television houses mostly owned by the government. What they did most time was to run propaganda for those in power, which was short sighted.

So there was a vacuum because people wanted to be entertained. Some people who did not have any technical knowledge and lack ideology but were business savvy saw this opportunity. They started making movies, which was rubbish, but the people were hungry for anything and they sold a lot of movies. There was a problem with the messages as well. Talking about how your mother is a witch, your stepmother is against you.

One medicine man cast a spell on you and the likes. All that was rubbish, but it was expected because their intellect did not go beyond that. They were catering to the lowest common denominator. But as I said, they kept entertainment alive, never minding the quality and content of what they produced. And I always give them kudos for that. As for the quality, forget it.

Continue Reading
You may also like...
Related Topics:journey, nollywood, obasanjo