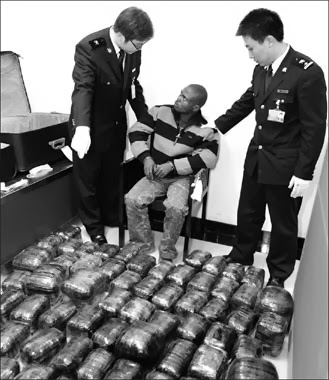 A Nigerian was handed over to police in Panaji, Goa, India by residents Friday after the scooter he was riding met with an accident and packets of cannabis tumbled out of the two-wheeler’s glove-box, a ruling legislator said.

The Nigerian, who has not been identified by police yet, was arrested by the officials from Mapusa police station, 15 km from Panaji, and was taken to a medical facility because of the injuries he suffered in the accident.

“The Nigerian fell from his scooter after meeting with an accident. He was injured, but immediately tried to hide the drug packets which had fallen from his bike in the bushes by the road,” Bharatiya Janata Party MLA from Calangute Michael Lobo said, adding that residents informed police.

“Police, who arrived here after being informed, have taken him away in a van…,” Lobo said.

Lobo accused police of being hand-in-glove with the drug mafia, claiming that police were scared to act against Nigerians, several of whom, he said, continued to be living in Goa illegally, despite a crackdown last year.

The murder of a Nigerian last year allegedly by a rival drug-running gang, and the arson which followed next, had also triggered a diplomatic row between India and Nigeria.Police have not offered any comment on the incident.