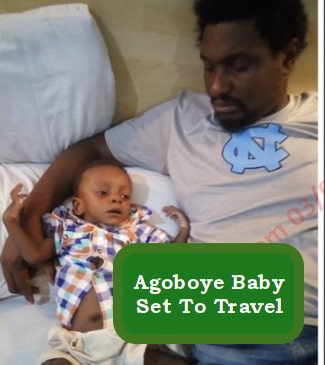 A dad whose baby has multiple holes in the heart, has denied absconding after receiving donations from well-meaning Nigerians to take the child abroad for urgent treatment.

The man, Monday Agoboye, told our correspondent that he had been preparing with doctors and others to find a solution to the child’s problem, hence he could not communicate with donors, who wanted to speak with him.

It was gathered that over N70m had been realised so far through the GoFundMe campaign for the artisan’s sick baby.

However, some of those behind the GoFundMe campaign for Agoboye have expressed surprise that he had not been responding to calls, a situation that made them to believe that he had run away and that the entire episode was a scam.

But Agoboye, who spoke with Southern City News in a telephone interview on Sunday, explained that he sent a video online to prove to Nigerians that contrary to the claim in some quarters, he had not absconded.

Maintaining that the money realised from the GoFundMe would be used for the purpose it was raised, he stated that he had no reason to run away.

Agoboye stated, “But you called me and you are reaching me; it is just that they want to spoil my name. We are working on how to take him (baby) abroad. I am just waiting for the doctors’ recommendations and then we are off.

“The doctors are putting their heads together and we are getting somewhere. We have to be very careful; that is the most important thing. We are already doing something to sustain my sick baby. Last week Thursday, we took him to the hospital for check-up.

“I just made a video now and sent it online; I am on air now. I have not absconded; I am still around and there is no problem.”

On an online medium, Gistmania, Agoboye was heard saying that he decided not to speak too much because of insecurity, adding that since he was leaving in a slum, he had to stay away from prying eyes.

He added, “By this week, we will be out of the country. We had to steer clear to ensure security. Where I stay is a slum. I have the passports for me and Beniah (the baby).

“Again, I could not take calls, having been running around because of the little baby. I have got the passports and we are waiting for the visas.”

It was, however, gathered that Agoboye’s wife had put to bed on January 31, 2019, a development that many believed could have increased the artisan’s responsibilities.

[By Chukwudi Akasike, Metro Plus]