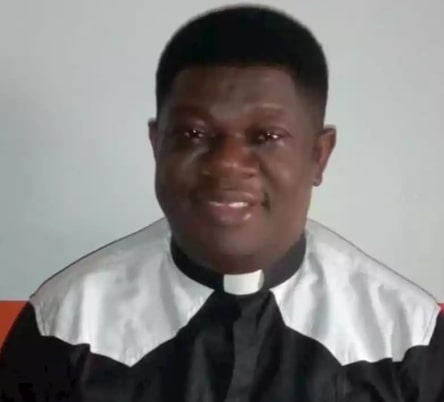 The priest of the Saint Helen’s Catholic Church, Ogbogoro, Rev. Fr. Simeon Kuro, slumped and died while celebrating the Mass yesterday Sunday the 22nd of March 2020.

Tragedy struck while he was delivering the homily on the church’s altar in the Obio/Akpor Local Government Area of the state.

The middle-aged priest was later rushed the University of Port Harcourt Teaching Hospital by members of his congregation, but he could not be resuscitated by the medical personnel as he was declared dead by doctors.

A source, who spoke on condition of anonymity, told Southern City News that the priest collapsed shortly after concluding the homily around 10am and was rushed to the UPTH around 10.30am, but was pronounced dead around noon.

“I can confirm to you that the priest of St. Helen’s Catholic Church, Rev. Fr. Simeon Kuro, collapsed today (Sunday) after the homily.

“He was rushed to the UPTH around 10.30am, but was declared dead by a doctor around noon. It is a sad situation.”