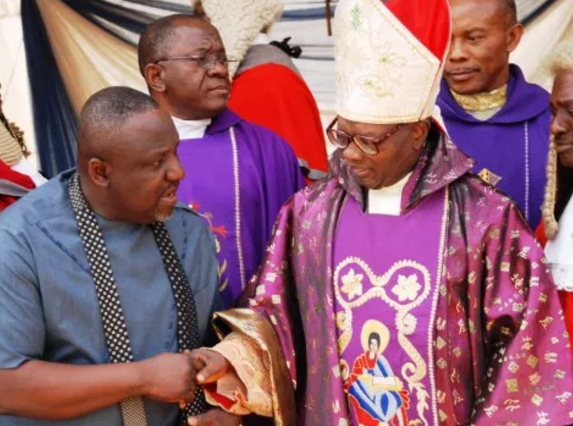 Our correspondent learnt on Saturday that his assistant was not also spared, as the prelate equally removed him from the parish.

The PUNCH had reported that Amusuo had on June 23 at the parish house reportedly shot his former assistant after a heated argument.

It was gathered that the former parish priest had reportedly accused Osuji of constantly disobeying him and flouting his orders.

Amusuo was later arrested by the police for being in possession of a firearm and shooting his former assistant.

The cleric, however, had been released on bail after he was interrogated at the state Criminal and Investigations Department of the police command in Owerri, the State capital.

Confirming the sacking of the priests by Bishop Amatu, a parishioner who did not want his name to be mentioned, said that a new priest had temporarily been drafted to the parish.

The parish laity leader, Sir Jude Obi, who confirmed to our correspondent that the two priests had been removed by the Bishop, said that a new parish priest would be assuming duties in a full capacity on Sunday, July 9.

Obi mentioned that the immediate intervention of the Bishop by transferring the two priests prevented the youths from locking up the church.

He also added that the new priest drafted to the parish celebrated Mass on Sunday the 2nd of July.

Lagos Police: We Moved Evans The Kidnapper To A Maximum Security Cell In Abuja For His Protection
Gay Husband With 2 Wives Arrested For Sexually Assaulting Underage Boys In Minna Confesses