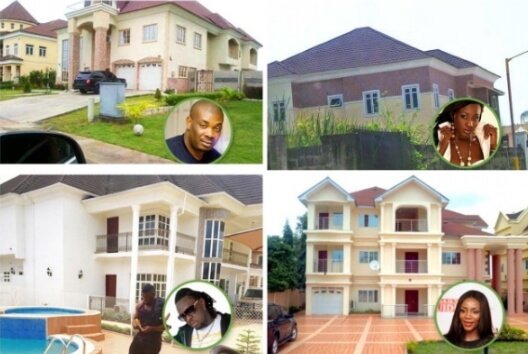 The year 2018, like every other year, is a year to remember for some Nigerian celebrities, while it is a year to forget for others. Some of these celebrities made a bold statement by acquiring new pieces of real estate, to cap off a relatively successful year, at the professional and/or personal levels.

The acquisition of new properties by these celebrities has, to a great extent, further boosted their respective wealth profiles. In this article, we’ll be bringing you a review of top Nigerian celebrities who acquired new mansions in 2018.

Real estate is undoubtedly one of the most lucrative  businesses in the world today. Housing and landed properties increase in value over time; hence, it is often seen as an investment, unlike cars and other luxury machines, which are seen as liabilities.

It is an open secret that most Nigerian celebrities lavish their money on cars, cloths and jewelries among others. The ironic thing is, most of these lavish spenders are still paying house rents to their landlords. However, few of these celebrities have opted to take the smarter route, by acquiring their own houses, to become landlords and landladies.

Read on, as we bring you a list of top Nigerian celebrities who acquired new houses recently.

Note: The list herein is in no particular order.

Professionally, Odion Ighalo had a relatively unsuccessful 2018 at the club level, as his club (now former club) got relegated to the second division of the Chinese Super League. However, the Nigerian Super Eagles Striker had a fairly successful year at the personal level; the highlight of this being his acquisition of a magnificent architectural masterpiece, which is sited right in the heart of Lagos.

Ighalo opened his mansion towards the tail end of last year, some time in December. He made the announcement himself via an Instagram post, which was accompanied by a short video clip, showing the exterior and interior of the mansion. The star player’s mansion was built around Lekki, Lagos Island, and it is worth hundreds of millions of Naira.

From the Instagram video, it was observed that the mansion is equipped with multiple rooms, top class interior design, ceramic floor, small-sized football pitch, a swimming pool, gym house, a spacious compound and lots more.

Although the actual value of the mansion is undisclosed, it is believed to be worth in the region of $1.5 million and $2 million.

Former Super Eagles player, Emmanuel Emenike, who got married in May last year, acquired a new mansion in his home state of Imo some months later. The footballer, just like his colleague, Ighalo, suffered relegation with his football club last season.

He was on loan with Las Palmas in the 2017/2018 season, when the club got relegated to second division. However, despite his failure at the professional level, the player added a multimillion Naira asset to his already bloated wealth profile, with the launching of his new mansion. The house warming party took place earlier this year in January. And it had in attendance several prominent figures, most notably Osita Iheme among others.

Emenike’s mansion is a castle-styled edifice, with multiple floors and rooms. The most striking feature of this giant edifice is its inter-linking overhead driveway, which connects the ground floor to the first floor.

Several estimates have been put forward regarding the actual value of the mansion. These estimates fall within the range of $1million to $3 million.

Popular Nigerian Dancehall music star, Timaya, who dropped a number of hit songs in 2018, topped the year off with the acquisition of a mansion in Lekki, Lagos Island. The singer became a Lagos landlord around September last year. He dropped the good news on his social media page around early October.

Timaya’s mansion made the headlines for its unique architectural style and exquisite interior decoration. The mansion is equipped with an outdoor swimming pool, multiple rooms, lush green environment, beautiful artworks, colorful interior, outdoor garage and lots more. Aesthetically, the Lekki-sited mansion might just be the best house owned by a Nigerian entertainer/celebrity.

Although the Dancehall singer did not disclose the actual worth of his newly acquired mansion, several estimates put the value of the edifice around $1.5 million (roughly 500 million Naira).

Nollywood actress, Mercy Aigbe, made headlines last year with the acquisition of her new house in Lagos. Aigbe’s house opening was trailed by controversies, which queried the financial capacity of the actress to have acquired such a beautiful and gigantic edifice in a place like Lagos.

In fact, many believed that the house must have been bought for her by one of her “big gods”. And the incumbent Governor of Lagos State, Akinwunmi Ambode was fingered as a person of interest in this regard.

Nevertheless, the fact that Mercy Aigbe is, today, a Lagos landlady remains unchanged. According to the actress, the new house was acquired around July last year, which was barely a year after she packed out of her estranged husband’s house. The house, which is located around Magodo in Lagos, is a colourful edifice, with a sparkling exterior, exquisite interior and an expansive compound.

Mercy Aigbe’s new house has been valuated by several estate/properly valuation firms. And with respect to these valuations, the house has been estimated to be worth between 80 million and 150 million Naira.

Nigerian music sensation, Kizz Daniel, bought his second house around March last year. Kizz Daniel’s new property is an upgrade to his first house, which is a mid-sized duplex. The house, a 2-storey edifice, with a unique touch of exterior design, is sited around Lekki, Lagos Island. According to the singer, in an Instagram post, the house was acquired from Haven Homes, a prominent Real Estate coy in Lagos.

Estimates have put the value of Kizz Daniel’s new mansion around 150 million Naira. However, this value is exclusive of the house’s interior decoration and equipment, which are yet to be made public by the star singer.

Nigerian Super Falcon star, Asisat Oshoalo, who plies her trade in China, and is currently on loan at Barcelona FC in Spain, opened her new house around July last year. She held the house warming party few days after the completion of the project. The house warming party had in attendance several family members, friends and well wishers.

Oshoala’s new house is located around Constain in Lagos, and it was reportedly acquired by the footballer for her parents. According to credible sources, the mansion is valued in the region of 100 million Naira.

Feel free to share your opinion(s) with us, by leaving your comment(s) in the designated box below.