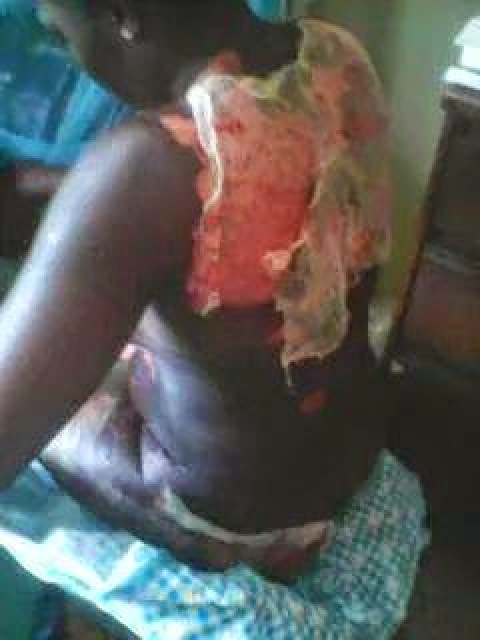 May 19, 2014 – Nigerian Custom Officer Who Attacked Woman With Acid In Badagry Lagos Boasts “Nobody Can Arrest Me”

Pictured above is the photo of an innocent salesgirl that works at a local food store who was bathed with acid by her boss Nwaeze, a custom officer.

The suspect has boasted that he is above the law after bathing the lady with a deadly acidic solution 2 weeks ago.

Mr. Nwaeze who is said to head a Customs unit at Mosafejo Aradagun, is quoted as boasting he “can do and undo”.

The victim is Ms. Tope Fadipe. She is Salesgirl at a local food store run by Mr. Nwaeze’s family.

She had been selling stocks for the family for about three years before the incident.

However, community residents say, Mr. Nwaeze got frenzied at her refuting the allegation, and a heated argument escalated where he alledgedly had bathed her with a deadly acid solution.

Currently, residents say, Nwaeze belched his car radio speakers loudly whenever driving in the street, with a carriage posting to show that he is above impunity since the May 9th incident.

A resident in the street told SaharaReporters that it is part of Mr. Nwaeze’s forte, to “intimidate and oppress people with impunity,” due to his status as a Customs Officer.

The victim, Tope Fadipe, is currently being treated for her severe burns at the Badagry General Hospital. Witnesses and doctors say her condition is worsening since that attack.

Saharareporters learned through a medical source that, Nwaeze has now tried to secretly collect Ms. Tope from the hospital, without giving off any hint what he wants to do with her.

This custom officer must be arrested… Fashola over to you….

MEND: “We Bombed Okrika Refinery Bcos Niger Delta Amnesty Is Fraud”
Comedian Seyi Law: “How I Met My Wife On Stage In Lagos”