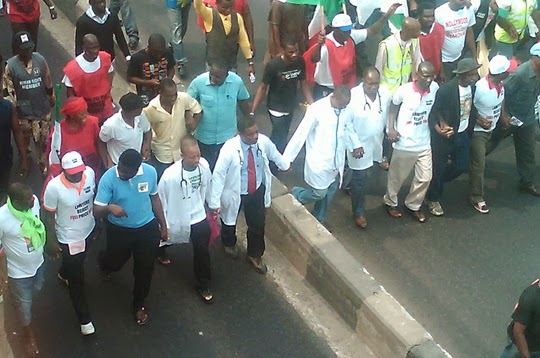 Medical Doctors at LASUTH Hospital in Ikeja Lagos have joined their colleagues on a 5-day warning strike that started on Wednesday to join the nationwide protest against Federal Government’s failure to address the Nigerian Medical Association (NMA)demands.

All the patients hurriedly discharged were told to come back for treatment on Sunday.

The mother of a discharged patient, Yetunde IFeoluwa, told reporters outside the hospital that she was asked to go home by the officials of the hospital because doctors were on strike. “ I have an appointment with the doctor today for special shoes for my child who cannot walk. But on getting to the hospital I was told to go back and return on Sunday because doctors are on strike. I have been carrying him on my back since he was born. The doctor said that I should come today for the shoes but I was turned back at the gate by officials of the hospital,” she stated.

Another patient, Mopelola Otunoye, who was accompanied by her two daughters lamented the pain she was going through. “I will now have to go back in pains. They are sending me back home for another five days. The Federal Government should please try to meet the demands of the doctors so that we will not die at home before the strike is called of,” she pleaded.

At the diabetic department of the hospital, our correspondent saw a woman supported by her son trying to get the attention of a staff but no attention was paid to her. “We will have to go to a private hospital since we were asked to go. We have no choice because my mother is in serious pains,” the son said.

The 5-day warning strike will end on Sunday.