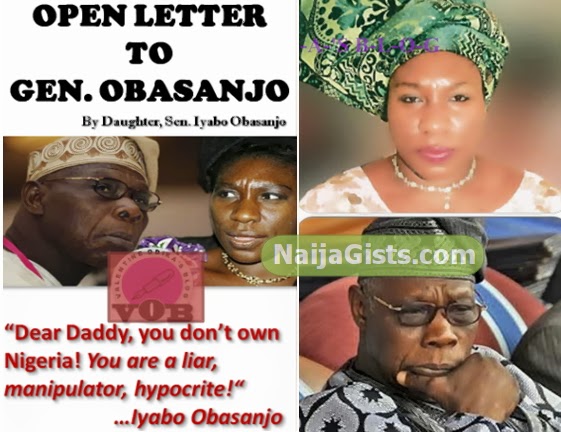 December 19, 2013 – Iyabo Obasanjo Said She Wrote The Letter To Her Dad

Obasanjo’s Daughter, Iyabo Wrote The Open Letter To Her Father; Turns Down Family Request For Retraction

It turned out that Iyabo was the one who wrote the letter.

She gave several conflicting interviews due to retraction requests made by Obasanjo’s family to avoid embarrassment on the part of the late Head of States.

In an exclusive interview with Vanguard, Iyabo Obasanjo has come open to confirm the authenticity of the letter source.

This is how PM News reported it:

The first daughter of former President Olusegun Obasanjo, Iyabo, has refused entreaties by family members, friends and political leaders to withdraw her statement disparaging her father.

In her statement exclusively obtained by the Vanguard newspapers, Iyabo Obasanjo described her father as a liar, manipulator, megalomaniac, narcissistic, two-faced hypocrite determined to foist on President Goodluck Jonathan what no one would contemplate with him as president. She also ruled out further communication with her father till death.

In the 11-page open letter, Iyabo Obasanjo, a former senator of the Federal Republic, painted a very unwholesome intimate portrait of Nigeria’s leader, accusing him “of having an egoistic craving for power and living a life where only men of low esteem and intellect thrive.”

And to dismiss insinuations and other reports in the social media that she was not the author of the statement, Iyabo insisted yesterday that she did not tell anybody to deny the statement on her behalf.

“Nobody can say that I told him that I didn’t write it. I am not a liar. I will not back away from what I wrote and there is nothing that is there that is a lie,” Iyabo told the paper.

She disclosed that she decided to break away from her father after realising that he cannot change from his manipulative person she had known all along, adding that throughout last year she did not speak with her father. She started speaking with him recently.

“The last time I spoke to him was three days ago and I decided that I was not going to speak to him again after that. That was the communication through which I realised that this man would never change from manipulations for himself,” Iyabo told the paper.

P.M.NEWS gathered that Senator Iyabo Obasanjo, who is in the United States, refused various entreaties by friends and family members to deny the statement by refusing to carry her telephone calls yesterday.

In the damning statement, Iyabo accused her father of orchestrating a third term for himself as president, cruelty to family members, abandonment of children and grandchildren, and also, a legendary reputation of maltreatment of women, including the mother.

Iyabo also foreclosed further political engagements in Nigeria. She denied any political motive for her missive, and described Nigeria as a country where her father and his ilk have helped to create a situation where smart, capable people bend down to imbeciles to survive.

“For you to accuse someone else of what you so obviously practiced yourself tells of your narcissistic megalomaniac personality. Everyone around for even a few minutes knows that the only thing you respond to is praise and worship of you,” she wrote in reference to Obasanjo’s letter dated 2 December to President Goodluck Jonathan.

Iyabo was not the only child of Obasanjo that denounced him, Gbenga, the first son of Obasanjo, had sometime ago expressed his frustration in a 50-paragraph affidavit before a court in Lagos detailing how his father slept with his estranged wife, Mojisola. Gbenga was seeking to divorce his wife who he got married on 29 April, 2000.

In the 10th paragraph of the affidavit signed by Emankhu Addeh, of Addeh and Associates, legal practitioner for the petitioner, the petitioner averred “that he knows for a fact that the respondent, his wife, committed adultery with and had an intimate, sexual relationship with his own father, General Olusegun Obasanjo, due to her greed to curry favours and contracts from him in his capacity as President of the Federal Republic of Nigeria.”

He said Mojisola also got rewarded for her adulterous acts with several oil contracts with the Nigerian National Petroleum Corporation, NNPC, from his father, among which was the NNPC consultancy training in supply chain management and project management awarded to her company, Bowen and Brown.

In Bitter-Sweet, My Life With Obasanjo, Oluremi, the wife of Chief Obasanjo, emphasised the former President’s hatred for his family when she said: “he told me to wait for him. When he emerged, he was in shorts and a short sleeve shirt. He slapped me twice and ran after me as I fled down the stairs…Throughout his tenure as Head of State, Obasanjo also ensured that I was not given any allowance as his wife. What he gave with one hand, he retrieved with the other.

“It rained cats and dogs the day Obasanjo handed over to Shagari at the Race Course, Onikan, Lagos, October 1, 1979. He asked me to move to Abeokuta with him but I declined because of his extra-marital indiscipline.

“When he was being drawn out of the Army, I was in the same car with him. When we went for thanksgiving at Owu Baptist Church, Abeokuta, I was also in the same car. At the church, I sat with him on the front pew. During the reception I was in control of events and sat his mistresses with other guests as their importance demanded.

“I made Stella take one of the middle seats with her friend, Julie Coker. After the ceremony, I told my husband that I had risen to the top with him by the grace of God. Now, I was giving him a free rein to misbehave with his mistresses as I would not stay with him at Abeokuta. He begged me earnestly not to leave him alone. He said he had not finished his house at Victoria Island, Lagos, wondering where I would stay. I still kept my flat on Lawrence Road, Ikoyi.

“Obasanjo did not forgive me that I did not live with him in Abeokuta. He stopped taking care of the children, probably thinking I had a lot of money. He only sent N400 a month. Iyabo and Busola were at Queen’s College, Lagos; Segun was at King’s College. I was now torn between raising my children and running the farm. Sometime in 1981, Gbenga and Enitan were due to return to school at Corona after the long break.

“When the school fees were not forthcoming from their father, I went to the late Simbiat Abiola for assistance. She prayed that God would help. I later sold off my gold bangles to Alhaja Abdulraq, a jeweller, to raise the fees.

“My topsy-turvy relationship with Obasanjo continued. He would drive past Oduduwa Crescent without checking on his children, who were progressing in education. Iyabo, Busola and Segun were making excellent grades at school. I was struggling to make ends meet.”

Note: Iyabo Obasanjo who initially denied the letter has confirmed she’s the person who wrote it.

21 thoughts on “Obasanjo’s Daughter, Iyabo Wrote The Open Letter To Her Father, Turns Down Withdrawal Request From Family”