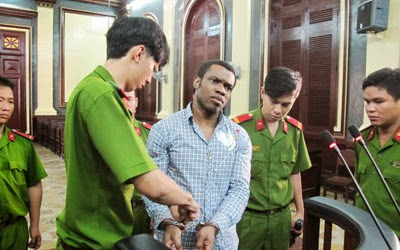 Oct 29, 2013 – Nigerian Man To Be Executed In Vietnam: Drug Smuggler, Ejiogu Benjamin Ikechukwu To Be Killed By Lethal Injection

A Nigerian has been sentenced to death for drug trafficking in Vietnam, state media said on Wednesday.

According to AFP, a court in Vietnam, whose drug laws are among the toughest in the world, on Monday handed a 31-year-old Nigerian man, Ejiogu Benjamin Ikechukwu, a death sentence for smuggling 3.4 kilograms of methamphetamines from Qatar to Vietnam.
Vietnam takes a hardline on drugs and anyone found guilty of attempting to smuggle more than 100 grams of heroin or cocaine can face the death penalty.
Convictions and sentences are revealed only by local media which is strictly under state control in the communist nation.

Ejiogu who was arrested at the city’s Tan Son Nhat Airport on June 23, 2012, after arriving from Thailand, with the drugs allegedly found in 19 nylon bags hidden in a battery charger, claimed during interrogation that he had been asked by another man to carry some goods including 16 pistons and the battery charger to Viet Nam, and that he did not know there were drugs inside.

Meanwhile, after a two-year hiatus in carrying out capital punishment due to problems of procuring chemicals for lethal injections, Vietnam executed its first prisoner by the method in August.

The country currently has more than 586 prisoners on death row, at least 117 of whom meet all the criteria for immediate execution, media reports have said.
Although the country does not release statistics on executions, rights group Amnesty International recorded five executions in 2011 and said 23 new death sentences were handed out that year, mainly to drug traffickers.