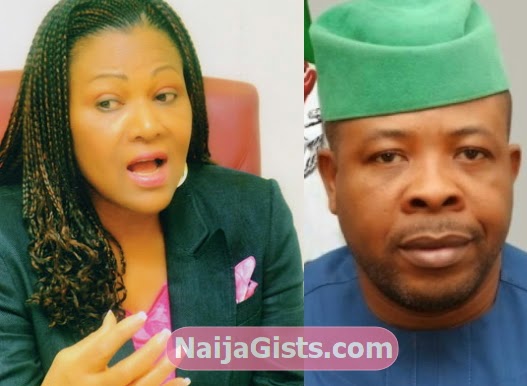 Over the weekend, the alleged trouble maker beat up a PDP leader at a meeting of delegates in Ezinihitte -Mbaise Local Government Area of Imo State.

Eyewitnesses said Chris Anyanwu and Ezinihitte PDP Chairman Chinemerem Madu engaged each other in a heated argument that led to a physical fight on Saturday the 1st of November 2014 during a meeting/election of delegates.

At the height of argument, Chris Anyanwu allegedly reached out to Madu and gave him a dirty slap on the right cheek.

In exchange, we learnt Mr Madu reached back to her and gave her several hot slaps that caused her to roar like a wounded lion.

Her yell reportedly attracted the attention of onlookers who couldn’t but blame her for making the first move.

She was later rescued from Madu who according to sources meant to teach her the lesson of her life.

Fillers in Imo State alleged that Chris Anyanwu is a trouble maker that slaps her husband at will, throws slippers and shoes at men at the slightest provocation.

Chris slapped Madu because she was displeased with the PDP Chairman’s attitude and because of his loyalty to Honourable Emeka Ihedioha.

She was reportedly rushed to the hospital for checkup when she complained of breathing problems.

Which kind madam be this…. Na wa o.