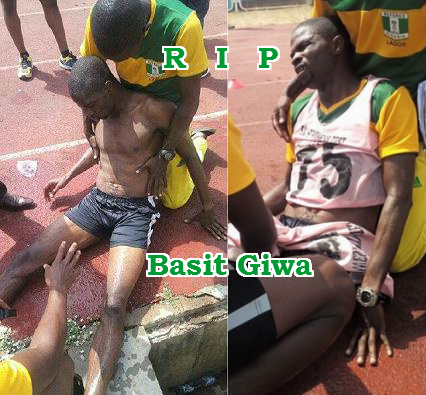 Mr Giwa Olayiwola Basit died at an hospital in Ibadan hours after he suffered a massive heart attack during a Fitness test at Lekan Salami stadium in Adamasingba.

The Lagos-based sportsman was confirmed dead in the wee hours of Monday the 21st of December 2015.

“The members of the Nigerian Football Referees Association, NRA, are in grief following the death of one of its members, Giwa Olayiwola Basit who died during Zonal leg of the National Fitness Test exercise in Ibadan, Oyo State.

Until he met his untimely death Monday at the South West Zonal centre, Giwa was among the
Grade One Referees who took part in the Fitness Test expected of Referees willing to take part in activities of the NRA this coming season. After completing the 12 Laps of the High Intensity Test, Giwa reportedly lost consciousness.

The late referee from Epe Referees Society of the Lagos State Referees Council was immediately besieged by the standby medical team who rushed to the hospital. However, he was unable to survive.

Suffice it to note that before participation in the physical fitness test, an annual exercise organised by the Nigerian Football Federation in conjunction with the NRA, participants are expected to undergo medicals to ascertain their ability to be part of the exercise.
NRA President, Azeez Tade who was shocked by the sad development, has on behalf of the
Referees’ body extended sympathy messages to the family of the deceased, Epe Referees Society and Lagos State Council over the death of Giwa, stating that NRA has again lost a budding who like others were in Ibadan to undertake the Fitness Test.

Tade opined that measures were put in place to check such occurrence while asking for prayers
for the soul of the departed.”