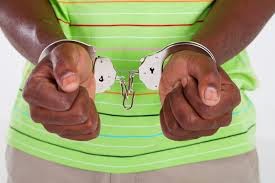 Another Facebook murder suspect has been arrested in Nigeria following a brutal murder at an hotel in Lagos.

An homosexual identified as Michael Okorocha has murdered a sex partner he met on the popular social media site.

The 24-year-old murder suspect and the manager of an hotel based in Oke Ofa area of Lagos state have been arrested for the murder of a young man identified as Okere John Chinedu.

Okorocha allegedly used a jack knife and sliced John’s throat in the hotel room and he bled to death.

According to police sources, Okorocha, who resides at Mafon Area in Ogun State, allegedly lured John who resides in Lekki-Ajah area of Lagos State to the hotel to have sex with him.

The police sources said that while they were inside the room, John resisted Okorocha’s attempt to have sex with him and in anger, Okorocha used a knife and sliced John’s throat and he bled to death.

After the incident, Okorocha reportedly lied to the hotel staff on duty that he wanted to buy something outside the hotel and escaped.

The following day when the management went on routine check in the rooms at the hotel, they discovered the naked body of John with blood all over the room.

The matter was reported at Ejigbo police Station and the manager was arrested. The police later tracked down Okorocha through the help of his parents in Mafon area.

In his confession, Michael Okorocha said he killed the victim in anger after he refused to satisfy him sexually in the expensive executive suite.

The matter was transferred to SCID, Panti, Yaba. The suspect has been charged with murder and remanded in prison custom at Ikoyi pending the advice of the Directorate of Public Prosecution, DDP.