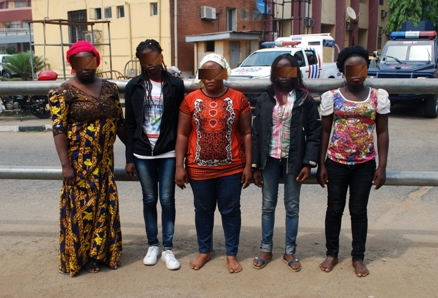 January 11, 2016 – Nigerian Hairdresser Who Abandoned Her Baby & Husband In Search Of Greener Pastures In Libya Rescued From Human Trafficker

One of the 4 women rescued from a human trafficker, Ganiat Ajijola, arrested by the operatives of the Rapid Response Squad (RRS) of Lagos State Police Command, over the weekend, has disclosed that she abandoned her two children for her husband in order to pave way for botched Libya trip.

The victim, Cecilia Bankole, 26, a hair dresser stated that her husband, name withheld, resisted her plan to abandon her children in search of Golden Fleece to Libya.

The mother of two children aged 2 and 4 years respectively, noted that when the issue was discussed with her husband initially, he disagreed with the plan, “I told my husband to allow me to go so that I would have an opportunity to raise funds for the family. I pleaded with him but he insisted in having the custody of his children. Although, I am a hairdresser but not done my freedom, going to Libya to work as artisan would enable me raise funds for my freedom as well as take care of my family. Even, when my mother pleaded with him that she would be taking care of the children while I will be away, he still declined. However, after much persuasion, my husband threatened me to have the custody of his children after my departure and I must not look back for them,” she added.

She explained that the human trafficker refused to open up for them how long they would stay in Libya.

“The trafficker didn’t tell us the number of years we are going to spend in Libya. She only told us the due date of the passport and that we are going by road,” the innocent mother said.

Expressing a contrary opinion, Mrs Maria Bankole, the victim’s mother and a prophetess in a white garment church in Alagbado, said that, what Ganiat Ajejola told her was that her daughter would be re – united with her after two years.

“I was informed of a big madam, whom Ganiat Ajejola was working for in Libya needs hairdressers to help her manage her shop. Upon hearing that my daughter will be going abroad, I volunteered my daughter because she is a hairdresser. I begged her husband but he declined to allow her go on the trip but I have prayed about it and God said she should go. That is why I am encouraging her,” she said.

According to her, “I followed her to the point where they were arrested because I want to know Ganiat Ajejola before their departure. I am not aware they were going by road. They told me Ganiat was taking them to Abeokuta to arrange an international passport for them.”

The operatives of the RRS whom were on the trail and surveillance of the human trafficker for two weeks before her arrest, hinted that they acted based on a tip–off from the Ministry of Women Affairs and Poverty Alleviation.

The rescued victims and the human trafficker have been immediately transferred to National Agency for the Prohibition of Trafficking In Person (NAPTIP).