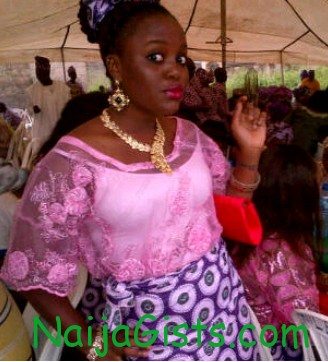 To those who do not know her, the late Wunmi Adebayo was a 200 level student of Tai Solarin University in Ogun State, Nigeria in her lifetime. naijagists.com

She’s a popular girl of the town who’s known to be dating a rich guy but unknown to her, the guy she’s dating is a notorious armed robber who operates mainly at night.

On Sunday September 9, 2012, Wunmi barged into her boyfriend’s house and to her surprise she saw him and his friends celebrating with guns.

As she tries to make her escape, she was grabbed, raped and shot to death.

Her boyfriend later claimed armed robbers who visited his house killed her.

The news of Wunmi Adebayo’s death quickly went viral online and offline with the claim she was killed by some robbers at her boyfriend’s house.

Few days ago, a new twist to the story surfaced.

We learnt her boyfriend has confessed to the Police that he killed her.

According to a source, Wunmi’s parent who found the story suspicious invoked her spirit to torment her killer.

Invocation of spirits is a common practice in many parts of Nigeria especially if the death of a person is suspicious.

After the invocation ritual, the spirit of the deceased will then torment the killer until he or she confesses.

So he confessed to the police. According to him, he is an armed robber unknown to Wunmi. Wunmi came to his house that day, barged in and met him and his friends celebrating with guns on their table.

She tried to run back, but they caught her, beat her, and raped her before they finally shot her.

He said he had to do that so that Wunmi won’t tell anyone what she saw.

See the photo of Wunmi after

Warning to all ladies: Be careful who you go out with.

Not all that glitters is gold