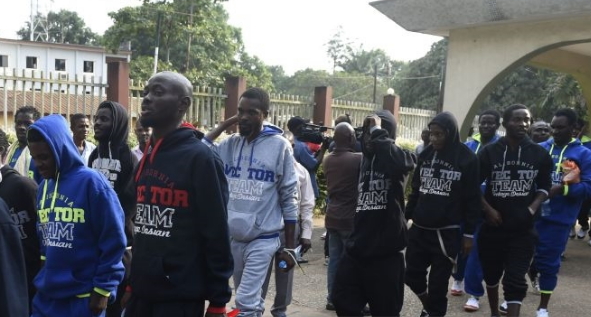 Some Nigerians migrants who returned to Nigeria on Sunday are currently protesting non payment of their stipend for their transportation to their various destinations.

73 of the protesters who are pregnant said they arrived Benin yesterday and were lodged at the Motel Benin Plaza hotel by the State government only for them to be told to vacate for another set of returnees expected to arrive the state tomorrow.

As early as 7:30 a.m., the returnees were seen buying snacks while those without money were begging passers- by before the state government brought food for them.

Many of them looked unkempt, haggard and hungry.

Some of them said they have been in an underground cell for more than six months.

They were made to undergo medical check- up including screening for HIV/AIDs.

The protest started when they were told no money was made available for them after they were subjected to biometric screening by the state government.