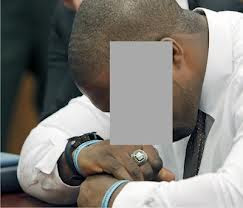 A 32-year old man has been arrested and charged to court for stealing tithe in a church in Lagos State, southwest Nigeria.

Alaba Balogun allegedly committed the offence during a prayer session at the Presbyterian Church, Yaba, Lagos.

It was learnt that when the congregation was praying, the suspect stole a bag containing N200,000 belonging to another worshipper, Mrs Tinu Onitana. The money was meant for her monthly tithe offering.

We gathered that while the victim closed her eyes and was busy praying, Balogun who was sitting close to her quietly stole her bag and left the church hall.

However, he was caught by one of the church guards when he was leaving the church premises.

Meanwhile, when the victim discovered that her bag had been stolen after prayer, she immediately went outside the church hall and raised alarm. It was then she saw Balogun being interrogated by the church guards.

The father of two kids was handed over to the police at Sabo, Yaba division where he allegedly made a confessional statement.

During interrogation, it was alleged that Balogun confessed that he saw the money when the woman opened her bag and decided to steal it because he needed the money to offset his debts.

The suspect is now facing a one count charge of stealing at a Lagos Magistrate’s Court presided over by Mrs S. K. Metapo.

The prosecutor, Mr. A. Chris, applied for a short adjournment to enable him present facts of the matter before the sentence.

His prayer was granted and the matter was adjourned till 28 February for facts and sentence.