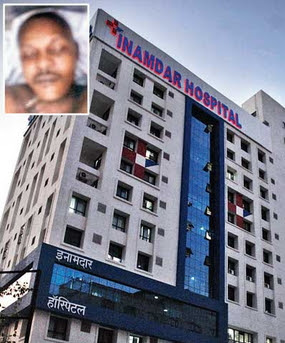 Mr Mbamara Chideara Festus, a Nigerian man based in Mumbai, India has died  of apparent alcohol overdose after his colleagues (mostly Nigerians) dumped him at a local hospital and fled for fear of arrest.

The 28-year-old Nigerian man died during treatment at Inamdar Hospital.

According to Prune Mirror India, Festus gave up the ghost after 7 people dropped him at the casualties ward of the aforementioned hospital in an unconscious state.

An autopsy conducted at Sassoon General Hospital revealed that Festus died of  alcohol overdose after a party at Hotel Shalimar, Kondhwa.

We learnt after the drug overdose incident, he fell unconscious.

According to CCTV video footage, 5 men and 2 women dropped him at the hospital and fled immediately. Doctors pronounced Festus dead minutes later.

According to a security guard at the hospital where Festus died, he wrote down the vehicle’s registration number.

The plate# aided Wanowrie Police officials to track down the car to Kondhwa.

A senior police inspector BD Mohite who was assigned to the case said they have tracked down the car to a party at Hotel Shalimar in Kondhwa.

Festus’s friends in Mumbai are Nigerians who attended the party with him.

“It looks like he may drunk beyond his limits and then faced its ill-effects.”

Mohite added, “We established contact with his friends in Mumbai. They came Pune in two separate cars at the invitation of one of their friends here. While partying, Festus suddenly collapsed.

One of his friends, identified as Chukwuma took him to the hospital, along with six others. While treating him, doctors declared him dead. On hearing this, his friends panicked, thinking they might get into trouble with the police, especially since they did not have their passports with them. They left the hospital at once and got in touch with us only after they got back to Mumbai.”

Mohite further said that, as per the post-mortem report, Festus had no external or internal injuries. The report states that the details of the cause of death have been kept confidential. “However it is part of the investigation as to whether any other narcotic substances were used,” Mohite said.

Sunil Date, administrative officer, Inamdar Multispeciality Hospital said, “Around 3:15 am, around 7 to 8 people came in two cars. They took the patient to the Casualties ward, then left in a hurry. He was in a very bad state. When doctors took him and checked his ECG, they found he was already dead.”