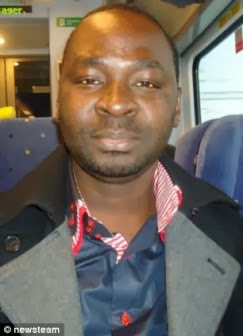 An Nigerian man living illegally in the UK who escaped deportation on 2 desperate occasions has been jailed for allegedly raping a lady in her house.

Idris Popoola, a 34-year-old married Nigerian man has been scheduled for deportation when he finished his 7-year-jail sentence over the brutal attack on his victim.

According to court officials, Mr Popoola came into the United Kingdom back in 2005 with a 12-month visa. After the expiration, he was permitted to stay in the UK temporarily.

He was arrested in Dec 2011 for overstaying. He successfully appeal the ruling because he was married with kids at that time.

Northampton Crown Court heard that Popoola, who worked as a nightclub bouncer, was granted temporary leave to remain in the UK again in January last year, after his family circumstances were taken into consideration.

11 months after the grant, he was arrested for brutally raping a lady in her own house.

The night club bouncer met his victim at a McDonald’s restaurant. One thing led to the other, he found himself in the victim’s home and attacked her.

He then ordered her to drop him at a train station.

Popoola, who sold mobile phone top-up cards in Nigeria before moving to the UK, is thought to have lived in Oxford before settling in Thornton Heath, South London, where he trained as a bouncer and gained work with an agency which supplied a Northampton nightclub.

Popoola, an agency-employed bouncer outside Bar So in Northampton town centre has been sentenced to 7 years in jail after he was found guilty of rape following a 4-day trial

Judge Lynn Tayton told him: ‘It was a serious aggravating factor that the rape took place in the victim’s own home, as this was an abuse of the trust placed in you by the victim and has undermined her feelings of safety in her own space.’

Idris Popoola is set for deportation in 2020.