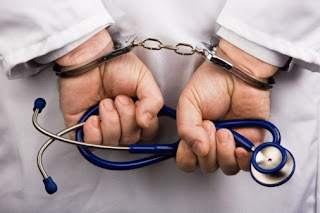 A medical doctor is cooling off in police detention for allegedly raping a female patient at a Government Hospital in Benue State.

The incident happened in Naka, Gwer LGA of the state on Wednesday October 23rd, 2013.

According to Benue State Police spokesperson, Mr Daniel Ezeala, the man was arrested at the aforementioned hospital ward on Wednesday after he was caught in the act.

According to Ezeala, investigation has started on this sensitive case as police declined to release the name of the suspect in question because he is one of the high-ranking doctors at the Government-owned hospital.

The doctor was touring the maternity ward when the incident happened.