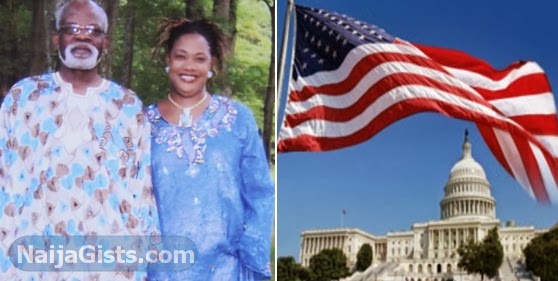 January 23, 2014 – Nigerian Men Who Killed Their Registered Nurse Wives In The United States Of America

This report was written by Abiodun Ladepo, a US-based Nigerian woman.

It is about the sharp increase in cases of spousal abuse leading to death among Nigerians in the United States of America .

LA-based Abiodun said Nigerian men are killing their wives who are nurses in America at an alarming rate.

According to her, this is an epidemic that must be checked.

Read her writeup below:

Those were David Ochola’s words during his 911 (U.S. Emergency Number) call to authorities after shooting dead his 28 years old wife, Priscilla Ochola, in Hennepin, Minnesota.

The 50-years old husband was tired of being “disrespected” by his wife, a Registered Nurse (RN) whom he had brought from Nigeria and sponsored through nursing school only to have her make much more than him in salary – a situation which led to Mrs. Ochola “coming and going as she chose without regard for her husband.” The couple had two children – four years old boy and a three years old girl.

In Texas, Babajide Okeowo had been separated from his wife, Funke Okeowo, with whom he resided at their Dallas home. Upon the divorce, the husband lost the house to his wife, along with most of the contents therein, as is usually the tradition in U.S. divorces where the couple still has underage children.

Mr. Okeowo, 48, divorced his wife because not long after she became a RN and made more money than him, she “took control” of the family finances and “controlled” her husband’s expenditure and movement. The husband could no longer make any meaningful contribution to his family back in Nigeria unless the wife “approved” it. He could not go out without her permission.

Frustrated that his formerly malleable wife had suddenly become such a “terror” to him to the point of asking for in court and getting virtually everything for which he had worked since coming to the US thirty years prior, the husband got in his vehicle and drove a few hundred miles to Dallas to settle the scores.
He found her in her SUV, adorned in full Nigerian attire on her way to the birthday bash organized in her honor. She had turned 46 on that day. Mr. Okeowo fired several rounds into his wife’s torso while she sat at the steering wheel, mercilessly killing her in broad daylight.

Also in Dallas (they sure need anger management classes in Dallas), Moses Egharevba, 45, did not even bother to get a gun. The husband of Grace Egharevba, 35, bludgeoned her to death with a sledge hammer while their seven years old daughter watched and screamed for peace.

Mrs. Egharevba’s “sin” was that she became a RN and started to make more money than her husband. This led to her “financial liberation” from a supposedly tight-fisted husband who had not only brought her from Nigeria, but had also funded her nursing school education.

Like Moses Egharevba, Christopher Ndubuisi of Garland, Texas, (these Texas people!) also did not bother to get a gun. He crept into the bedroom where his wife, Christiana, was sleeping and, with several blows of the sledge hammer, crushed her head.

Two years before Christiana was killed, her mother, who had been visiting from Nigeria, was found dead in the bathtub under circumstances believed to be suspicious.
Of course, Christiana was a RN whose income dwarfed that of her husband as soon as she graduated from nursing school. The husband believed that his role as a husband and head of the household had been usurped by his wife. Mr. Ndubuisi’s several entreaties to his wife’s family to intercede and bring Christiana back under his control had all failed.

If circumstances surrounding the death of Christiana’s mother were suspicious, those surrounding the death of a Tennessee woman’s mother were not. Agnes Nwodo, a RN, lived in squalor before her husband, Godfrey Nwodo, rescued her and brought her to the US. He enrolled her in nursing school right away. Upon qualifying as a RN, Mrs. Nwodo assumed “full control” of the household.

She brought her mother to live with them against her husband’s wishes. Mrs. Nwodo quickly familiarized herself with US Family Laws and took full advantage of them. Each time the couple argued, the police forced the husband to leave the house whether he had a place to sleep or not.

On many occasions, Mr. Nwodo spent days in police cells. Upon divorcing his wife, Mr. Nwodo lost to his wife the house he had owned for almost 20 years before he married her. He also lost custody of their three children to her, with the court awarding him only periodic visitation rights. Even seeing the children during visitation was always a hassle as the wife would “arrive late to the neutral meeting place and leave early with impunity.”
Mr. Nwodo endured so many embarrassing moments from his wife and her mother until he could take it no more. One day, he bought himself a shotgun and killed both his wife and her mother.

Caleb Onwudike’s wife, Chinyere Onwudike, 36, became a RN and no longer saw the need to be controlled by her husband.

Mr. Onwudike, 41, worked two jobs to send his wife to her dream school upon bringing her to the US from Nigeria. After four years, she qualified as RN. Once she started to make more money than her husband, she began to “call the shots” at home. She “overruled” her husband on the size and cost of the house they purchased in Burtonsville, Maryland. She began to build a house solely in her name in their native Umuahia town of Abia State, Nigeria, without her husband’s input whatsoever. Mrs. Onwudike came and went “as she liked,” within the US and outside the US. In fact, she once travelled to Nigeria for three weeks “without her husband’s permission” to lavishly bury her father despite her husband’s protestations that they had better things to do with the money.

Mrs. Onwudike let her husband know that this was mostly her money and she would spend it however she wanted. Through her hard work, she had risen to a managerial position at the medical center where she worked.
Upon her return from burying her father, her husband got one of her kitchen knives and carved her up like Thanksgiving turkey inside their home on New Year’s Day.

Death is death no matter how it comes. But the goriest of these maniacal killings is probably this one that happened here in Los Angeles, California.

Joseph Mbu, 50, was tired of his RN wife’s “serial disrespect” of him. The disrespect began as soon as she became a RN. Gloria Mbu, 40, had once told her husband he must be “smoking crack cocaine” if he thought he could tell her what to do with her money now that she made more money than him.

Before she became a RN, Mr. Mbu had been very strict with family finances and was borderline dictatorial in his dealings with Mrs. Mbu. However, Mrs. Mbu learned the American system and would no longer allow any man to “put her down.”
When Joseph Mbu could not take it anymore, he subdued his wife one day, tied her to his vehicle and dragged her on paved roads all around Los Angeles until her head split in many pieces.

[Author’s note: Although these are true stories, all the names and some of the details of the incidents have been altered as a mark of respect to the families involved. All of the killer husbands noted in these stories were found guilty. Most of them received the death sentence. Only the California and Maryland culprits received life sentences without the possibility of parole.]

It often comes to Nigerian men living in the US as a rude shock when their wives become the household’s bread winner.

It is not a big deal for Nigerian husbands to answer phone calls from their girlfriends while lying in bed with their wives; to buy expensive gifts for their girlfriends and making only perfunctory, casual attempt to conceal such gifts.

This cruel and phenomenal hostage-taking by Nigerian men in Nigeria is what Nigerian women in America are trying to stop. And they figured out the easiest way to begin curtailing these bullish husbands’ wings is to improve their own potential to earn more. And a good way to earn a decent pay in the US (unlike in Nigeria) is to become a Registered Nurse.

What is the big deal if a RN wife makes more money than her husband? In fact, I know of a few military couples with the wives senior in rank to their husbands even though they joined the military at the same time. Yet, nobody is killing or divorcing anybody. Is this strictly an RN thing?