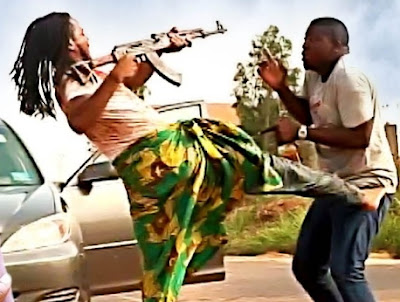 Recently, while marking my 46th birthday, I took time off to ruminate on how God insulates me in my walk through the valley of the shadow of death. Being someone who sees a glass of water as half full rather than half empty, I chose to dwell on the sweetest of some six attacks that I have suffered in the hands of hoodlums. Yes, the sweetest of four robberies, one kidnap and one set-up incidents. When I shared the movie-like story on my Facebook, it just went viral -as they say. It is a real-life story of an armed robber who led a gang to attack my family and me but ended up then and forever as my friend and inspiration.

That fateful Friday in July, 2008, as I turned into my street, the rear mirror picked up three motorcycles trailing me. Something warned me, ‘they are robbers’. But I told whatever it was to stop raising unnecessary alarm. I mean, why would robbers in Uyo of all places attack me? To be sure, I am from Akwa Ibom, and without intending to offend modesty, I can re-echo what I hear in the streets about me. I have lived for the people.

Immediately, my brain that is wired to multi-task went into overdrive, faster than light. I began to weigh several options. Shortly, I got to the gate and honked. All three bikes rode past a little and cleared. Again, the mirror televised them. I counted quickly; six passengers in all. I call them that because that’s the dummy they sold. I saw them haggling over the fare, and paying off the cyclists. When the gate opened and I drove into the garage which was built into the duplex, I disembarked, walked into the living room downstairs and half-ran upstairs. I never bothered to crosscheck if the passengers were up to any mischief.

My plan was to rush a bath and a meal in quick succession before leaving with Mrs. BUSH at 9.45 for church at 10. In her bedroom, I saw her with her sister and her two children and recalled they had been due on a visit from Abuja earlier that same day. Since I was in haste, and didn’t want the very precocious children wondering ‘why uncle BUSH cannot even welcome somebody properly’, I requested that all five of us relocated to the master’s so we could catch up while I prepared.

Wondering what was keeping the domestic aide I looked out of the bedroom and seeing her around the stairs, I queried why she hadn’t attended to me. The young woman simply gesticulated by placing one of her fingers vertically on her lips, which in sign language (as I understand it) means Sssh. In the ensuing split second, I saw movements; then guns. Like Usain Bolt when he was Usain Bolt, I must have taken one hundredth of a second to fly back into the bedroom to warn the two chatty women and playing children. Seriously, I mean that part about flying because my feet didn’t touch the ground all through the two-metre dash.

I screamed for help thorough the window, but in those days when electricity was more off than on, the cacophony chorused by competing generators made sure no one heard me. It didn’t matter because in the twinkling of an eye, five of the passengers had landed in my bedroom. No, you could no more address them as passengers because passengers don’t tot guns.

Nigerian movie scriptwriters and actors do an excellent job the way they capture robbery scenes. The one I watched live unfolding in my room was carbon copy of what Nollywood reports: the commands and counter-commands, the threats, expert searching of the g-spots of the room, and the lightening speed of their nefarious exploration. Lying face down, and watching from the corner of my eyes, I found myself mentally appreciating the bad boys for being so good at their nonsense trade.

‘Everybody face down. Close your eyes. Any movement, I kill you. Oga, we can’t find any good money’. I responded that we hardly keep money at home. ‘I will blast off the head of this small boy if you don’t give me money’. Once Mrs. BUSH heard the threat, she screamed ‘please don’t. I have fifty thousand somewhere in this room’.

‘Madam, you are a good woman. Don’t mind Oga. Come and bring it’. While the scoundrels hi-fived themselves and yelled in unholy joy, I cursed under my breath: ‘so, it’s true after all that whosoever doesn’t pay tithe to God, must pay it to Satan’. Just that evening, I had telephoned her for twenty thousand Naira to give someone. She had said that she didn’t have any money. Two hours after, she had more than double that to gift armed robbers. Serves her right!

I was in that reverie when I heard, ‘Oga, wake up. We’ve finished. You are going with us’. I stood up like a soldier. ‘Let’s go down’. I led, but as we stepped out of my room and seeing the door of Mrs. BUSH’s room ajar, they diverted me thereto; while two of them carted loot 1 downstairs. ‘Kneel down, Oga. Your face on the bed, eyes closed. Any mistake, I will shoot’. He didn’t need to add the threat because I’m smart enough to never be tempted to think that it could be toy gun…

To be continued next week.