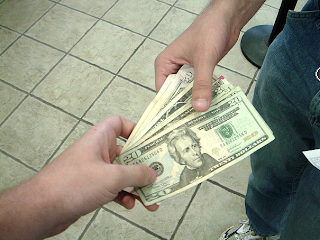 Oct 4, 2013 – Nigerian Narrates Bad Experience On First Visit To Dubai “How Fake American Dollars Bought From Lagos Airport Got Me In Trouble”

I’m writing this piece on behalf of innocent Nigerian citizens that might have shared this bad experience outside the country in respect of fake US Dollars been sold to Nigerians by Bureau de Change operators in this country.

My question inrespect to this is…. who is to be blamed? The CBN, Banks that only accept foreign currency and not selling, or Bureau de change? I have been to different banks in order to buy foreign currency in exchange with naira e.g GTBank but the response is…… We only accept, we don’t sell.

Meanwhile, my experience goes thus with the issue of fake dollars……
Last month, I changed naira equivalent to $500 at the Murtala Muhammed International Airport (MMIA) in Lagos before boarding a flight to Dubai with Ethiopian Airline. On arriving at the Dubai (DXB) airport, I wanted to change the $500 at the duty free where it was discovered that $400 out of the $500 I was given at the airport in Nigeria is fake.

This same sad incident occurred to another Nigerian citizen who also got fake $600 from the same place.

Meanwhile, nothing incriminating was found on me after been thoroughly investigated by Dubai custom officers apart from the issues of the fake dollars.

The case was later transferred to Dubai police station where I was detained for over 24hours without water or food with the other man.

During the questioning from the police on how I got the fake dollars, I told them the same story of how I exchanged naira equivalent to dollars from bureau de change at the airport but they never believed me. The police said the bureau de change operator supposed to give me receipt which I never received.

My fellow Nigerians, where in Nigeria is receipt given when you change money from bureau de change operators?

Will this incident have happened if our banks are permitted to sell foreign currency to individuals in exchange for Naira?

The answer is capital “NO”. The banks are supposed to be responsible for detecting fake local and foreign currency, dollars in particular.

I hereby implore the Central Bank of Nigeria (CBN) governor, Lamido Sanusi to save individuals from falling victim of these heartless Bureau de exchange operators.

I’m innocent of the charges levied against me in respect of carrying fake dollars. I only went to Dubai for four days vacation and nothing more than that.

Article by GA, victim of fake dollars detained in Dubai.