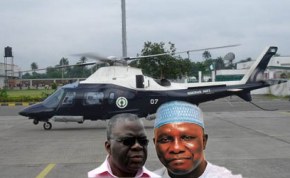 The Nigerian Navy whose helicopter crashed in Bayelsa State on Saturday, 15 December, 2012, killing the Kaduna State Governor, Patrick Yakowa, former National Security Adviser, Patrick Azazi and crew members, like many of our public institutions, is in a rotten state.

A top Naval source who spoke on the tragedy that befell the nation described the Nigerian Navy Air Squadron which operated the crashed Agusta 109 helicopters from Ojo, Lagos, a disaster.

To buttress his assertion, he disclosed that the squadron has lost three helicopters, seven pilots, crew members and six passengers in six years. He recalled that on 20 April, 2006 a Nigerian Navy helicopter crashed near Owerrenta because the pilots were coerced to fly at night to deliver election materials. The helicopter crashed leaving no one onboard alive.

“This means the Nigerian Navy tasked the pilots to perform duties which were not commensurate to the training they were given. Has the Nigerian Navy learnt from this incident? Has the Navy taken any steps to avoid reoccurrence? No official report has been released about this crash. A board of inquiry was set up and investigations were conducted by a team of Navy officers who did not have any know-how, let alone the expertise to conduct proper air crash investigations.

As stated earlier, the reports of the investigation never saw the light of the day. May be they are safely lying somewhere in a vault in naval Headquarters, Garki, Abuja. For us, this attitude indicates that the Nigerian Navy is not ready to learn from this incident. Though, shortly after the crash, the Navy has made efforts at training some pilots at Night Flying.”

Two years later, specifically on 26 January, 2010, the officer reminded P.M.NEWS, that another fatal crash occurred near Port-Harcourt, killing all onboard. “As usual, a BOI was set up and no official report has been released from Garki. This shows the Navy is adamant and impervious to learning,” he said.

Following the tragedies recorded by the squadron, the Naval officer, who spoke on condition of anonymity, appealed to President Goodluck Jonathan to order the Navy to stop air operations now because the Navy has not developed the proper professional attitude required to conduct air operations.

He called for a proper investigation, “not a Board of inquiry by a bunch of clueless Navy officers but a proper air crash investigation by professionals,” to look into the crash that occurred on Saturday.

That sometimes, even fuel which is always budgeted for is an impediment to air operations due to late arrival; that technicians/engineers are not properly empowered; they have not been properly exposed to the standards required of an air technician by frequent re-trainings and that their certificates do not meet ICAO standards. (In fact, their certificates should surpass ICAO standards because they are military),” the officer said.

According to him, the Nigerian Navy helicopters are sometimes deployed outside their home base to Warri and Port-Harcourt for long periods of time. During this period, the aircraft is totally exposed to weather elements of rain and too much sunshine. This is so because the base in Warri does not have a hanger. The Air Squadron at Ojo is popularly known within the Naval circle as ‘the Evil Forest’. Nobody wants to be posted there. Junior officers go to the extent of offering bribes just to cancel their postings to “the Evil Forest”, because of the tyrannical, despotic, nature of senior officers.

The atmosphere in the Nigerian Navy Air Squadron is fouled by the despotic and arrogant attitude of the seniors who have created a division in the Squadron, where the juniors see their seniors as their enemies. The trust and rapport between them is broken. This greatly hampers safe operations and inhibits a conducive working environment that is an important factor for aviation safety. The juniors hence find it difficult to engage the seniors in a fine conversation during flight or even offer any suggestion. No aviation organisation can operate in this kind of atmosphere, where victimisation, intimidation are the order of the day.

He observed that “the pilots/engineers (juniors) just do their work for the sake of doing it. This is dangerous. In fact, most aviators (pilots/engineers) won’t mind leaving the Air Squadron or even leave the Navy entirely. It may equally be of interest to know that “the Evil Forest” (Navy Air Squadron) officers have to fight or bootlick to go on leave and sometimes they are not allowed to go on full leave. This is contrary to the best aviation practices. Aviators need rest in order for them to work efficiently.

Furthermore, the officer revealed, the aviators are sometimes given orders to fly under difficult circumstances. Two pilots were grounded for refusing to fly during bad weather. An inquiry was set up and investigation revealed that the pilots were right for refusing to fly. But, typical of the Navy, the pilots were grounded and their flying wings confiscated. It took the noble administration of the CDS (then as CNS) to re-incorporate them back to the Air Squadron. The pilots are made to fly even when they are tired. They are made to go for maritime patrols into sea, when they are not trained for that. The Nigerian Navy pilots have performed deck landings on the Nigerian Navy ships NNS ARADU and NNS THUNDER several times. The question to ask is: Are any of these pilots certified for deck landings?

Finally, the officer noted, that “in the Navy Squadron, the pilots are only given basic training. They do not attend redundancy training, night flying, deck landings, search and rescue and other training packages which will make them well rounded pilots. No pilot in the navy can safely conduct a proper emergency landing (due to lack of proper continuous training). The air crew, which includes the Marshallers, ATC and hoist operators, lack adequate and certified training. Some of them receive local training at the squadron, which falls far below the required aviation standards.” [culled from PMNews]