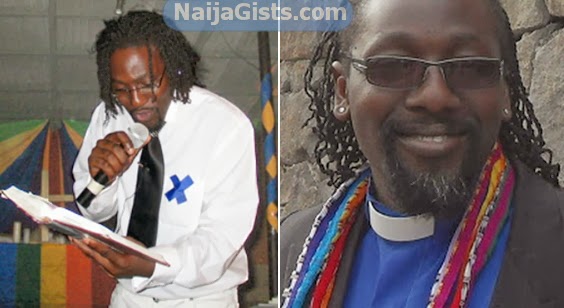 Nigeria‘s first openly gay Pastor Jide Macaulay who fled Nigeria few years back for the fear of persecution after opening a gay church in Lagos has lent his voice on the current ban on homosexuality in Nigeria.

Jide Macaulay told Vanguard on Saturday he has been getting so many emails and messages from Nigerian gays and lesbians expressing their fear, anger and plan to kill themselves over ban on same sex marriages in Nigeria.

The law bans same sex marriage, and through its wording, also seeks to criminalise people, organisations and agencies who support homosexuality and those who do not immediately report any known homosexuals, or homosexual activities.

Read what Jide Macaulay said about the ban below:

Since January12th, when the announcement was made, the LGBT-community has been thrown into panic. There is chaos throughout Nigeria as we are grappling with keeping up with mass arbitrary arrest, humiliation, blackmail, extortion and police corruption in several ‘charge and bail’ cases.

The hostility in Nigeria against gay people has reached epic proportions. In the East of Nigeria, many are fleeing their homes. One gay man, labelled “a leader of the homosexual” is on the run. His parents and brother were threatened with arrest if they don’t provide information about his whereabouts.

In the same region, more than six people were arrested. In the West of the country, we can confirm that nearly ten people have been arrested and bailed. The police have extorted funds from each victim at an average of between $120 to $300. Most of the people arrested were tortured and asked to provide additional details of other gays or lesbians. In the North of Nigeria, in Bauchi and Kano, there are two separate cases of arrests and harassment of gay people. Both areas are firmly under sharia law, which carries the death penalty.

In the wake of the passing of the anti gay laws, there is no doubt of the many calls, emails and online messages we have received, expressing fear, anger, anxiety and suicide attempts. This is a critical time for all LGBTI-people; a time when our ideals are being stretched and tested.

The Nigerian President and legislators have ignored the critical aspect of the Universal Declaration of Human Rights, and passed into law a legislation that is unjust.

In a BBC Radio program yesterday, I spoke out to condemn this law. However, a few of the speakers claimed that a research showed that 98% of Nigerians are happy and jubilant about this law, and based on their religious beliefs that homosexuality is “unafrican”, against religion and unnatural.

Nigeria like many African nations, has many issues and the oppression of LGBT-citizens is largely unwelcomed by an already marginalised group. We are now looking into our first priority intervention to help those displaced and or attacked.

In view of the present situation in Nigeria, we are helping with emergency evacuation to safe homes around the country. The Initiative for Equal Rights (TIERs), a Human Rights Organisation in Nigeria, has now opened a 24hr support line for LGBT-people in Nigeria.

We also continue to advise all LGBT-people to stay away from trouble, not pick unknown phone numbers and sign off gay dating websites.

Where in the bible is homosexuality encouraged.