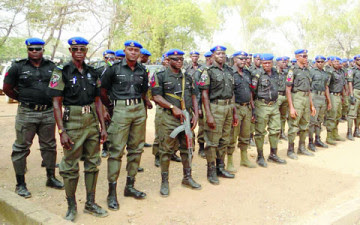 December 12, 2013 – Nigeria Police Force Or Nigerian Doctors: Who Is To Blame?

Sometime back, my mum was hit by a horde of stray bullets. On that noteworthy evening, my parents decided to go see a friend. Being that the friend in question stays close by, they decided to walk- a decision they’d forever regret. Not much long later, there was a gunshot and everyone dove for cover, by the time my dad had come out of hiding to know what happened, he found my mum lying almost almost-lifeless body in the pool of her own blood; about seven pieces of shrapnel had found their ways into her body. Devastated but strengthened by the discovery that her heart was still beating at all, he called out for help so he can convey her to nearest hospital and many who witnessed the event and saw the poor woman life fleeting hurriedly, moved farther away from the scene- they didn’t want police trouble.

Eventually the poor woman was taken to a hospital and you can imagine the unbelief, shock, dismay and anger that welled up in my dad’s heart when he was told that before they can do a thing, that they’d need to see a report from the Nigeria Police Force, indicating how that she’s a victim, just as he claimed. It was an act of God that that woman survived that ordeal.
If that woman had died, who would have been held responsible? The hospital or the Nigerian Police Force? Would the matter have seen the light of day? Would it not have been just another face in the Nigerian crowd that died; mere statistics that nobody except family cared about?

Will I be asking too much from my home country if I expected to see doctors handle patients in critical conditions the way their counterparts in the UK and US treat theirs, irrespective of what their personal misgivings may be concerning the patient. I thought that the Hippocratic-oath and its ethics held doctors to the primary charge of saving lives, irrespective of the circumstances surrounding their patents then going ahead to contact the police, should they entertain any suspicion afterwards.

Who would have believed that with the many innumerable road accidents occurring each and every day on our interstate freeways, that people hardly pause to assist anyone involved in a road mishap? First, they are afraid it may be a decoy by some smart armed robber to lure unsuspecting travelers into being robbed. Even when people have finally verified that it was a real accident and that dying victims are in critical need of medical help, they still hesitate to be of any meaningful assistance.

Why? Because they don’t want police trouble. Even when hospitals are close by, we watch people die, who would otherwise have received timely medical help simply because we don’t want police trouble. If by any chance the victim finds his way into a general hospital, they’d ask for police report before they can touch the victim. I know you’d ask what on earth police report has to do with an accident victim, but these heart-rending occurrences take place almost every day in our different hospitals even in Government-owned hospitals. You’d have thought there’s no legislature binding doctors from turning away patients in critical conditions for no reason at all but the truth is, no one seems to remember that.

Sometime ago, a good Samaritan, who was trying to save the life of an abandoned accident victim in critical condition ended up spending three good days in police custody. He had found the victim in a really bad shape and was hurrying to get him to the hospital first before death gets to him when policemen accosted them began interrogating him while the patient lay there dying in the car. He ended up sleeping in police custody for days, just for trying to help a dying accident victim.

I want fellow Nigerians to know that you can sue the life out of any hospital that rejects anyone who needed urgent medical attention by hiding under the unwarranted cloak of police report. I want Nigerians to know that even when they have no money and their loved ones are made to suffer or die because doctors are demanding all kinds of monetary deposits before they’d attend to them, that they have the right to be attended to, at least have their loved ones stabilized before the doctors would say anything about money. You don’t need spend a fortune to take them to court, just find a good and ambitious attorney who’d enter a bargain to get a percentage if you win and the hospitals will pay for the damages they have done.

For the doctors, I am short of words. I wish the Nigerian Medical Association chairman can see this. I used to think doctors are very enlightened people. I wish they could change their attitude and attach a little bit of value to human lives. I just wish they can do better than turning patients in urgent need of medical health away to die for no reason, when they have every resource necessary to save them.

About the author: Ifeanyi J. Igbokwe is a peak performance expert, motivational speaker, consultant and an action coach with special interest with personal and corporate growth and effectiveness.  Email: ifeanyi.igbokwe@gmail.com

11 thoughts on “Nigeria Police Force Or Nigerian Doctors: Who Is To Blame?”